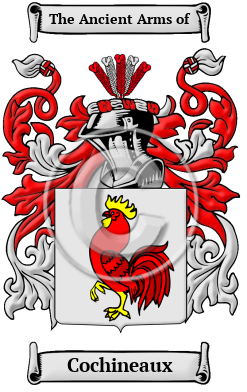 Early Origins of the Cochineaux family

The surname Cochineaux was first found in Dauphiny (French: Dauphiné or Dauphiné Viennois), a former province in southeastern France, where this celebrated family held a family seat since ancient times.

Early History of the Cochineaux family

This web page shows only a small excerpt of our Cochineaux research. Another 170 words (12 lines of text) covering the years 1669, 1700, 1763, 1791, and 1792 are included under the topic Early Cochineaux History in all our PDF Extended History products and printed products wherever possible.

Notable amongst the family at this time was Christophe Cochet, known in Rome under the name Cristoforo Coscetti or Coscietti (c. 1606 - 1634), a 17th-century French sculptor. Son of the Parisian master mason Jean...
Another 34 words (2 lines of text) are included under the topic Early Cochineaux Notables in all our PDF Extended History products and printed products wherever possible.

Migration of the Cochineaux family