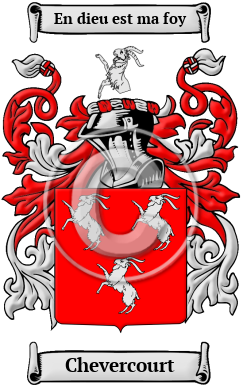 The Chevercourt surname is derived from the Anglo-Norman French word "chivere" or "chevre," meaning "goat." The Latin for a nanny goat "capra" has in the past been used interchangeably as the surname of some family lines of this name.

Early Origins of the Chevercourt family

The surname Chevercourt was first found in Devon. The first known ancestor of the name was Roger de Chievre and Petronilla living circa 1000 A.D. in a town in the south of Belgium called by that name. Roger's sons William Chievre and his brother Ralf de la Pommeraie, were companions of William the Conqueror in the invasion of England in 1066 and were given large estates in Devon. A William Chievre, [1] Capra was listed in the Domesday Book as holding land in both Devon and Wiltshire.

Early History of the Chevercourt family

This web page shows only a small excerpt of our Chevercourt research. Another 58 words (4 lines of text) covering the years 1186, 1327, 1614, 1708, 1637 and 1690 are included under the topic Early Chevercourt History in all our PDF Extended History products and printed products wherever possible.

Outstanding amongst the family at this time was Ezekiel Cheever (1614-1708) English-born, immigrant to America in 1637 and became a schoolmaster, and the author of probably the earliest American school book, "Accidence, A...
Another 32 words (2 lines of text) are included under the topic Early Chevercourt Notables in all our PDF Extended History products and printed products wherever possible.

Migration of the Chevercourt family to Ireland

Some of the Chevercourt family moved to Ireland, but this topic is not covered in this excerpt.
Another 119 words (8 lines of text) about their life in Ireland is included in all our PDF Extended History products and printed products wherever possible.

Migration of the Chevercourt family

Some of the first settlers of this family name or some of its variants were: Ezekiel Cheevers, who came to Boston in 1637; Wm. Chevers, who settled in Virginia in 1695; Richard Cheevers, an emigrant in bondage sent to Barbados or Jamaica in 1696.