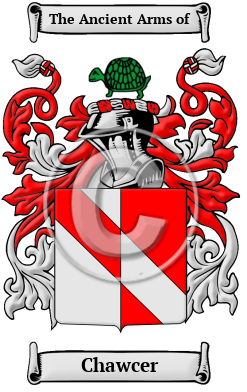 Early Origins of the Chawcer family

The surname Chawcer was first found in Kent.

"The family of Chaucer, Chaucier, Chaucers, or Chasur had been seated in the Eastern Counties, and some members were in trade in London. Richard le Chaucer was of London, 1328; John Chaucer in 1349 (Riley, Liber Albus, 438; Nicholas, Life of Chaucer, 94). The poet was probably kinsman of Bartholomew Chaucer, who possessed estates in Cambridge, Hunts, Herts, and Essex, 1312. In 1295 Gerard le Chaucer was of Colchester, Essex, and 1274 Alice de Chasar occurs as a tenant of the See of Ely in Cambridgeshire . In 1225 Ralph le Chauser is mentioned." [1]

"This surname is derived from an occupation. 'le chaucer,' a maker of chausses, i.e. leathern breeches; Latin, caleearius. Chaucer's grandfather was connected with Ipswich." [2]

The Hundredorum Rolls of 1273 include Roger Calcwere, Norfolk.

Geoffrey Chaucer (c.1343-1400), known as the Father of English literature, is widely considered the greatest English poet of the Middle Ages and was the first poet to have been buried in Poet's Corner of Westminster Abbey.

"Much of the obscurity that once involved Chaucer's parentage has been dispelled by the industry of Sir Harris Nicolas, Dr. Furnivall, land others. He was the son of a London vintner. " [3]

Early History of the Chawcer family

It is only in the last few hundred years that the English language has been standardized. For that reason, early Anglo-Saxon surnames like Chawcer are characterized by many spelling variations. As the English language changed and incorporated elements of other European languages, even literate people changed the spelling of their names. Scribes and monks in the Middle Ages spelled names they sounded, so it is common to find several variations that refer to a single person. The variations of the name Chawcer include: Chaucer, Chawcer, Chawcers and others.

Distinguished members of the family include Thomas Chaucer (c. 1367-1434), Speaker of the House of Commons, in all likelihood elder son of Geoffrey Chaucer by his wife Philippa, daughter of Sir Payne Roet and sister of Catherine Swnyford, mistress and afterwards wife of John, duke of Lancaster, was probably born in 1367. Early in life he married Matilda, second daughter and coheiress of Sir John Burghersh, nephew of Henry Burghersh, Bishop of Lincoln, treasurer and chancellor of the Kingdom. His marriage brought him large estates, and among them the manor of Ewelme, Oxfordshire. It is evident that his connection with the...
Another 165 words (12 lines of text) are included under the topic Early Chawcer Notables in all our PDF Extended History products and printed products wherever possible.

Chawcer migration to the United States +

Many English families tired of political and religious strife left Britain for the new colonies in North America. Although the trip itself offered no relief - conditions on the ships were extremely cramped, and many travelers arrived diseased, starving, and destitute - these immigrants believed the opportunities that awaited them were worth the risks. Once in the colonies, many of the families did indeed prosper and, in turn, made significant contributions to the culture and economies of the growing colonies. An inquiry into the early roots of North American families has revealed a number of immigrants bearing the name Chawcer or a variant listed above:

Chawcer Settlers in United States in the 19th Century