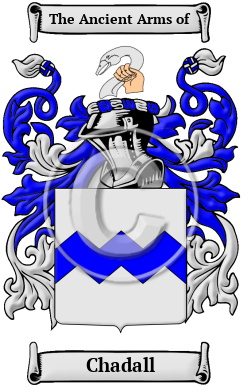 The name Chadall is an old Anglo-Saxon name. It comes from when a family lived in one of the various places called Chadwell in the counties of Essex, Hertfordshire, Leicestershire, and Wiltshire. Places called Caldwell exist in Warwickshire and the North Riding of Yorkshire. There is also a Chardwell in Essex and a Chardle Ditch in Cambridgeshire as well as a plethora of similarly-named places throughout England. The surname Chadall is derived from the names of these settlements, which are ultimately derived from the Old English words ceald, which means cold, and wielle, which means spring or stream. [1]

Early Origins of the Chadall family

The surname Chadall was first found in Essex at Chadwell, a parish, in the union of Orsett, hundred of Barstable. "At the time of the Norman survey, the parish belonged principally to the Bishop of London, and some portions to Odo, Bishop of Bayeux, and others. [2] The Domesday Book of 1086 lists the place name was Celdeuuella. [3]

Early History of the Chadall family

Before the last few hundred years, the English language had no fast system of spelling rules. For that reason, spelling variations are commonly found in early Anglo-Saxon surnames. Over the years, many variations of the name Chadall were recorded, including Chadwell, Chadall, Shadwell, Chadwel and others.

Distinguished members of the family include William Chadwell (born 1614), an English lawyer and politician, Member of Parliament for Mitchell (1640-1644), he supported the Royalist cause in the English Civil War; and Thomas Shadwell (1642-1692), an English poet and playwright who was appointed Poet Laureate in 1689. "He was grandson of George Shadwell, and son of John Shadwell of the parish of Broomhill, Norfolk. He claimed descent from the family...
Another 70 words (5 lines of text) are included under the topic Early Chadall Notables in all our PDF Extended History products and printed products wherever possible.

Migration of the Chadall family

To escape oppression and starvation at that time, many English families left for the "open frontiers" of the New World with all its perceived opportunities. In droves people migrated to the many British colonies, those in North America in particular, paying high rates for passages in cramped, unsafe ships. Although many of the settlers did not make the long passage alive, those who did see the shores of North America perceived great opportunities before them. Many of the families that came from England went on to make essential contributions to the emerging nations of Canada and the United States. Research into various historical records revealed some of first members of the Chadall family emigrate to North America: Dan and his wife Anne settled in Virginia in 1651.