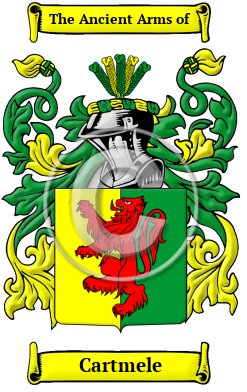 The ancient history of the Cartmele name begins with the ancient Anglo-Saxon tribes of Britain. The name is derived from when the family resided in or near the village of Cartmel in the county of Lancashire (now part of Cumbria.) [1] Thus, Cartmele is a habitation surname which is derived from the name of a place. Like most English local surnames, the name Cartmele was originally preceded by a preposition such as de. However, the preposition had usually been dropped from the name by the end of the 14th century. "The Staffordshire variants of this surname seem to have come from North Lancashire via Cheshire." [2]

Early Origins of the Cartmele family

The surname Cartmele was first found in Lancashire, at Cartmel, a parish, in the union of Ulverston, hundred of Lonsdale north of the Sands. "This place, which is supposed to have derived its name from the British words Kert, a camp, and mell, a fell, or small mountain, according to Camden was given to St. Cuthbert, in 677, by Egfrid, King of Northumbria, with all the Britons inhabiting it. In 782, Ethelred, upon his restoration to the throne of that kingdom, allured from their sanctuary at York the sons of Alfwold, who had been advanced to the crown upon his expulsion, and put them to death at Cartmel. In 1188, William Mareschall, Earl of Pembroke, founded a priory for Regular canons of the order of St. Augustine, dedicated to the Blessed Virgin, and endowed it with all his lands at 'Kertmell,' " [5] Now a village in Cumbria, it has more recently become known as the "home of sticky toffee pudding."

Early History of the Cartmele family

Until quite recently, the English language has lacked a definite system of spelling rules. Consequently, Anglo-Saxon surnames are characterized by a multitude of spelling variations. Changes in Anglo-Saxon names were influenced by the evolution of the English language, as it incorporated elements of French, Latin, and other languages. Although Medieval scribes and church officials recorded names as they sounded, so it is common to find one person referred to by several different spellings of his surname, even the most literate people varied the spelling of their own names. Variations of the name Cartmele include Cartmill, Cartmills, Cartmell, Cartmells, Kertmell, Cartmele, Cartmail, Kartmill, Kartmell, Certmill, Cartnell and many more.

More information is included under the topic Early Cartmele Notables in all our PDF Extended History products and printed products wherever possible.

Migration of the Cartmele family to Ireland

Some of the Cartmele family moved to Ireland, but this topic is not covered in this excerpt.
Another 198 words (14 lines of text) about their life in Ireland is included in all our PDF Extended History products and printed products wherever possible.

Migration of the Cartmele family

Searching for a better life, many English families migrated to British colonies. Unfortunately, the majority of them traveled under extremely harsh conditions: overcrowding on the ships caused the majority of the immigrants to arrive diseased, famished, and destitute from the long journey across the ocean. For those families that arrived safely, modest prosperity was attainable, and many went on to make invaluable contributions to the development of the cultures of the new colonies. Research into the origins of individual families in North America revealed records of the immigration of a number of people bearing the name Cartmele or a variant listed above: the Cartmell family, who settled in Sangamon County, Illinois in 1730; Thomas Cartmill, who was naturalized in New York in 1831; Neal Carmel, who was naturalized in Philadelphia in 1841.