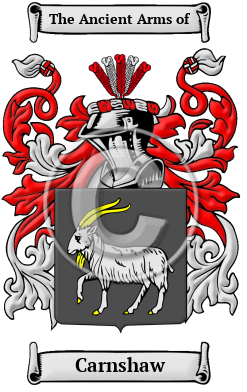 Early Origins of the Carnshaw family

The surname Carnshaw was first found in Cornwall where they held a family seat as Lords of the Manor of Philley.

Early History of the Carnshaw family

Notable amongst the family at this time was William Carnsew (by 1497-1570), of Bokelly in St. Kew, Cornwall, an English politician. He was a Member of Parliament (MP) for Bossiney in 1547...
Another 32 words (2 lines of text) are included under the topic Early Carnshaw Notables in all our PDF Extended History products and printed products wherever possible.

Migration of the Carnshaw family

Early North American immigration records have revealed a number of people bearing the name Carnshaw or a variant listed above: the name represented in many forms and recorded from the mid 17th century in the great migration from Europe. Migrants settled in the eastern seaboard from Newfoundland, to Maine, to Virginia, the Carolinas, and to the islands..