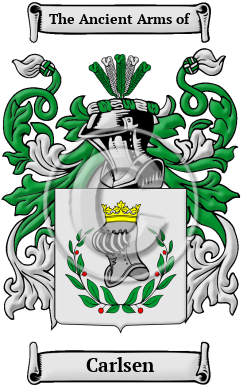 The origin of the distinguished Carlsen family can be traced to the rugged Scandinavian country of Norway. The surname Carlsen is derived from the Germanic personal name Carl, which means man. The suffix -sen and its variants are translatable as son of.

In the United States, the name Carlsen is the 8,317th most popular surname with an estimated 2,487 people with that name. [1]

Carlsen migration to the United States +

Carlsen Settlers in United States in the 19th Century

Carlsen Settlers in Australia in the 19th Century