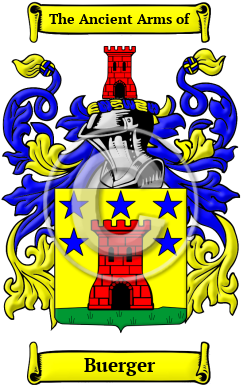 The Buerger surname refers to a citizen of a borough, from the Middle High German "burc," meaning a "fortified town." As a surname, Buerger may also come from one of the many place names in the region.

Early Origins of the Buerger family

The surname Buerger was first found in Austria, where the name Burger made a great early contribution to the feudal society of early Europe. The Burger family became prominent in local affairs and branched into many houses where family members continued to play important roles in the savage tribal and national conflicts which occurred as each group sought to maximize its power and status in an ever changing territorial profile.

Early History of the Buerger family

During this period prominent bearers of the name Buerger were Gottfried August Burger (1747-1794), German Romantic poet, who was best known for his ballad "Lenore" which was first published in 1773. Thomas François Burgers (1834-1881), South African...
Another 37 words (3 lines of text) are included under the topic Early Buerger Notables in all our PDF Extended History products and printed products wherever possible.

In the United States, the name Buerger is the 17,854th most popular surname with an estimated 2,487 people with that name. [1]

Buerger migration to the United States +

An inquiry into the early roots of North American families reveals a number of immigrants bearing the name Buerger or a variant listed above:

Buerger Settlers in United States in the 18th Century

Buerger Settlers in United States in the 19th Century