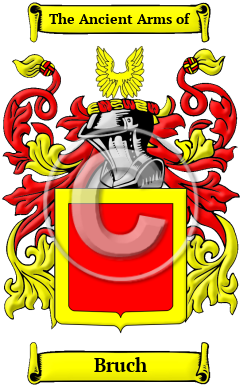 The name Bruch evolved in Germany in the historic state of Prussia. It is a patronymic name. Patronymics are derived from the given name of the father of the bearer. Names derived from the name of the mother of the bearer, which are less common, are called metronymic names. Patronymic names were generally formed from traditional, German given names, rather than from the names of saints or biblical figures, as is the custom in many other European cultures. Bruch comes from beside a dyke. Bruch is a topographic surname, which was given to a person who resided near a physical feature such as a hill, stream, church, or type of tree. Habitation names form the other broad category of surnames that were derived from place-names. They were derived from pre-existing names for towns, villages, parishes, or farmsteads. Other local names are derived from the names of houses, manors, estates, regions, and entire counties.

Early Origins of the Bruch family

The surname Bruch was first found in the Rhineland, where the name Bruch contributed greatly to the development of an emerging nation and played a large role in the tribal and national conflicts of the area. In later years the name branched into many houses, where family members continued to play a significant role in the local social and political affairs.

Early History of the Bruch family

This web page shows only a small excerpt of our Bruch research. Another 59 words (4 lines of text) are included under the topic Early Bruch History in all our PDF Extended History products and printed products wherever possible.

One can encounter great variation in the spelling of surnames: in early times, spelling in general, and thus the spelling of names was not yet standardized; and later, spellings would change with branching and movement of families. Variations of the name Bruch include Bruch, Bruche, Bruck, Brucke, Bruk, Brukke, Brouch, Brouche, Brouck, Brouke, Bruech, Brueck, Bruek, Brok, Brokke, Broech, Broeck, Broech, Broeche, Broek and many more.

More information is included under the topic Early Bruch Notables in all our PDF Extended History products and printed products wherever possible.

In the United States, the name Bruch is the 15,901st most popular surname with an estimated 2,487 people with that name. [1]

Bruch migration to the United States +

The state of Prussia was a great influence on the shape of modern Germany. After the Second World War, Prussia's land was divided among the Soviet Union, Poland, East Germany and West Germany and the state was abolished. Some Prussians remained in those countries after the war, while many others migrated to North America in search of a new start. Philadelphia was their primary point of entry to the United States, after which many of them moved on to Ohio, Texas, Illinois, California, New York, and Maryland. A large number of Prussians also migrated to Ontario and the prairie provinces as United Empire Loyalists. Analysis of immigration records has shown some of the first Bruchs to arrive in North America, and among them were:

Bruch Settlers in United States in the 17th Century

Bruch Settlers in United States in the 18th Century

Bruch Settlers in United States in the 19th Century

Bruch Settlers in United States in the 20th Century