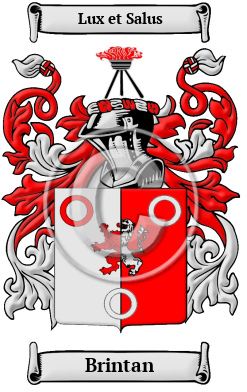 The present generation of the Brintan family is only the most recent to bear a name that dates back to the ancient Anglo-Saxon culture of Britain. Their name comes from having lived in the village of Brinton in the county of Norfolk. Brinton appears in the Domesday Book as belonging to the Bishop of Thetford, and having a total value of thirty pounds.

Early Origins of the Brintan family

The surname Brintan was first found in Norfolk at Brinton, a parish, in the hundred of Holt. [1] The village dates back to the Domesday Book of 1086 when it was first listed as Bruntuna. Literally the place name means "estate associated with a man called Bryni," from the Old English personal name + "-ing" + "tun." [2]

One of the first records of the name was Thomas Brunton or Brinton (d. 1389), Bishop of Rochester, a monk of the Benedictine house at Norwich. "He is said to have studied both at Oxford and Cambridge, and is variously described as bachelor of theology and as ‘doctor decretorum’ of the former university. Having taken up his residence in Rome, he was made penitentiary of the holy see, and on 31 Jan. 1372-3 was appointed bishop of Rochester by Gregory XI, in the room of John Hertley, prior of Rochester, whose election was set aside by the Pope." [3]

Early History of the Brintan family

This web page shows only a small excerpt of our Brintan research. Another 78 words (6 lines of text) covering the years 1273, 1190 and 1585 are included under the topic Early Brintan History in all our PDF Extended History products and printed products wherever possible.

Until the dictionary, an invention of only the last few hundred years, the English language lacked any comprehensive system of spelling rules. Consequently, spelling variations in names are frequently found in early Anglo-Saxon and later Anglo-Norman documents. One person's name was often spelled several different ways over a lifetime. The recorded variations of Brintan include Brinton, Brinston, Brinson, Brinstone, Bryenton, Brintnell and many more.

More information is included under the topic Early Brintan Notables in all our PDF Extended History products and printed products wherever possible.

Migration of the Brintan family

Thousands of English families boarded ships sailing to the New World in the hope of escaping the unrest found in England at this time. Although the search for opportunity and freedom from persecution abroad took the lives of many because of the cramped conditions and unsanitary nature of the vessels, the opportunity perceived in the growing colonies of North America beckoned. Many of the settlers who survived the journey went on to make important contributions to the transplanted cultures of their adopted countries. The Brintan were among these contributors, for they have been located in early North American records: Edward Brinton who settled in Virginia in 1606 before the "Mayflower"; Eliza Brintnall arrived in North America in 1682; Thomas Brinton arrived in New Jersey in 1675.