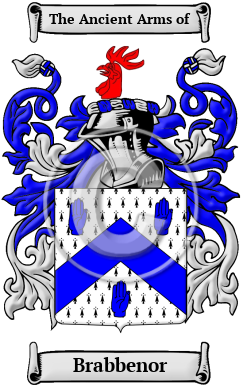 Early Origins of the Brabbenor family

The surname Brabbenor was first found in Ayrshire where one of the first records of the name was Walter Brabounare held a tenement in Irvine in 1418-1426. This Flemish industrialist family from Brabant was invited by the monarchs of Scotland to strengthen business interests in lowland Scotland. Their name was derived from Brabener, 'the Brabander,' i.e. a native of Brabant. [1] "Artisans and traders from Brabant settled early at Aberdeen and on the east coast of Scotland. Bremner is still at times pronounced "Brembner" in Caithness." [2]

Early History of the Brabbenor family

More information is included under the topic Early Brabbenor Notables in all our PDF Extended History products and printed products wherever possible.

Migration of the Brabbenor family

Research into the origins of individual families in North America has revealed records of the immigration of a number of people bearing the name Brabbenor or a variant listed above: Alexander Bremner who settled in Catalina, Newfoundland, in 1822; William Bremner settled in Savannah Ga in 1775; John Bremner settled in Philadelphia in 1813.