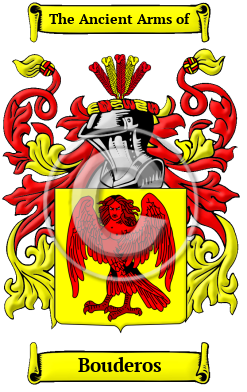 The present generation of the Bouderos family is only the most recent to bear a name that originated in that ancient area known as Languedoc. Their name comes from having lived in Languedoc, where the family was found since the early Middle Ages.

Early Origins of the Bouderos family

The surname Bouderos was first found in Languedoc, where the family was anciently established.

Early History of the Bouderos family

This web page shows only a small excerpt of our Bouderos research. More information is included under the topic Early Bouderos History in all our PDF Extended History products and printed products wherever possible.

The many different spellings of French surnames can be partially explained by the use of local dialects and by the influence of other languages during the early development of the French language. As a result of these linguistic and cultural influences, the name Bouderos is distinguished by a number of regional variations. The many spelling variations of the name include Boudreau, Boudreaux, Boudrot, Boudros, Boudrault, Boudreault, Boudriaux, Boudret, Boudereau, Boudereaux, Bouderot, Bouderos, Bouderault, Boudereault, Boudreiaux, Bouderet and many more.

Notable amongst the family name at this time was Michel Boudrot (Boudreau, Boudreaux), born in La Rochelle France, he emigrated to the Acadia and became Judge and Lieutenant General, Lieutenant-général et...
Another 30 words (2 lines of text) are included under the topic Early Bouderos Notables in all our PDF Extended History products and printed products wherever possible.

Migration of the Bouderos family

French settlers came early to North American, following in the wake of the explorers, and creating New France. Quebec City, founded in 1608 by Samuel de Champlain is said to have been the first American site founded as a permanent settlement, rather than as just a commercial outpost. But emigration was slow, in 1643, 109 years after the first landings by Cartier, there were only about 300 French people in Quebec, and by 1663, when the region was officially made The Royal Colony of New France, by Louis XIV, there still only around 500 settlers. Over 2,000 would arrive during the next decade. Early marriage was desperately encouraged amongst the immigrants. Youths of 18 took fourteen-year-old girls for their wives. The fur trade was developed and attracted immigrants, both noble and commoner from France. By 1675, there were around 7000 French in the colony, and by that same year the Acadian presence in Nova Scotia, New Brunswick and Prince Edward Island had reached 500. In 1755, 10,000 French Acadians refused to take an oath of allegiance to England and were deported to Louisiana. Despite the loss of the Colony to England, the French people flourished in Lower Canada. Among settlers to North America of the Bouderos surname were Jean Boudreau, the son of Martin Boudreau and of Marie Foucault, of Saint-Porchaire, in Charente-Inférieure, who arrived in New France around 1667. In 1671 he settled in the village of Royal, where he married Marie-Rose Vivien in 1673. He became a widower and later married É.