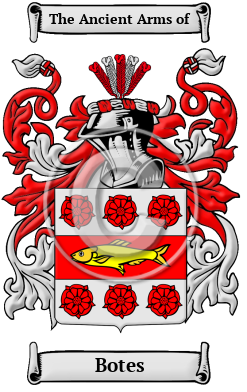 The German state of Prussia, which reached the zenith of its power in the late 19th century, is the glorious birthplace of the distinguished surname Botes. In the medieval era, after the fall of the Roman Empire, the German lands were inhabited by a variety of Barbarian tribes. The borders of the Barbarian kingdoms changed frequently, but the region that became known as Prussia was roughly divided between the areas of Brandenburg-Prussia, West Prussia, and East Prussia. The colorful history of Prussia provides a glimpse at the oldest origins of the Botes family. Brandenburg-Prussia is essentially the birthplace of modern Germany. By the 19th century, Brandenburg-Prussia had incorporated East Prussia, West Prussia and many other German territories. Moreover, in the late 19th century, it led the German states in the unification of Germany.

Early Origins of the Botes family

The surname Botes was first found in Prussia, where the name Butt was anciently associated with the tribal conflicts of the area. They declared allegiances to many nobles and princes of early history, lending their influence in struggles for power and status within the region. They branched into many houses, and their contributions were sought by many leaders in their search for power.

Early History of the Botes family

This web page shows only a small excerpt of our Botes research. Another 70 words (5 lines of text) covering the year 1802 is included under the topic Early Botes History in all our PDF Extended History products and printed products wherever possible.

One can encounter great variation in the spelling of surnames: in early times, spelling in general, and thus the spelling of names was not yet standardized; and later, spellings would change with branching and movement of families. Variations of the name Botes include Butt, Butte, But, Bute, Bott, Botte, Bot, Bote, Boet, Boett, Boette, Boete, Buett, Buet, Buete and many more.

More information is included under the topic Early Botes Notables in all our PDF Extended History products and printed products wherever possible.

In South Africa, the name Botes is the 302nd most popular surname with an estimated 22,440 people with that name. [1]

Migration of the Botes family

Since medieval times, the state of Prussia has played an important part in the history of Germany. The state's military powers were historically very strong, and endured until after the Second World War, when the territory was broken up and divided between the Soviet Union, Poland, East Germany and West Germany. A spurt of migration followed, with some Prussians going elsewhere in Europe and many others crossing the ocean to North America. Most entered the United States through Philadelphia. Some remained there, while more moved on to the states of Ohio, Texas, Illinois, California, New York, and Maryland. Others traveled to Canada and settled Ontario and the prairie provinces. Research into the origins of individual families in North America revealed records of the immigration of a number of people bearing the name Botes or a variant listed above: Richard But who arrived in New England in 1662; Hans Hendrick Bott who is recorded as having arrived in Pennsylvania in 1743; Johann Peter who arrived in Pennsylvania in 1753.

Historic Events for the Botes family +