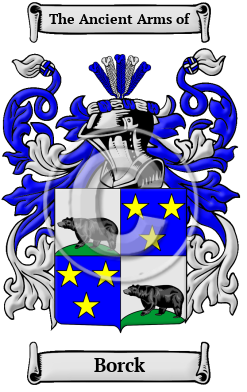 Nestled between the Rhine and Wesser rivers is the ancient German region of Westphalia. Westphalia, the home of the name Borck. Hereditary surnames were adopted in this region after the 12th century, and surnames were derived from localities were common. Local surnames originally denoted the proprietorship of the village or estate. When coupled with the German preposition von, which means from or of, local names can indicate that the initial bearer of the name was an aristocrat. The Borck family originally lived in or near one of the numerous places named Bork in Germany and in bordering Slav countries. Borck is a topographic surname, a type of local surname that was given to a person who resided near a physical feature such as a hill, stream, church, or type of tree. The toponym Borck is derived from the Old German word Burg, which meant castle or fortress.

Early Origins of the Borck family

The surname Borck was first found in Westphalia, where the name Borch was closely identified in early mediaeval times with the feudal society which would become prominent throughout European history. The name would later emerge as a noble family with great influence, having many distinguished branches, and become noted for its involvement in social, economic and political affairs.

Early History of the Borck family

This web page shows only a small excerpt of our Borck research. Another 74 words (5 lines of text) covering the years 1847, 1617, 1681, 1707 and 1747 are included under the topic Early Borck History in all our PDF Extended History products and printed products wherever possible.

One can encounter great variation in the spelling of surnames: in early times, spelling in general, and thus the spelling of names was not yet standardized; and later, spellings would change with branching and movement of families. Variations of the name Borck include Bork, Borck, Borcke, Borcker, Bork, Borkk, Borkke, Borch and many more.

Another 40 words (3 lines of text) are included under the topic Early Borck Notables in all our PDF Extended History products and printed products wherever possible.

Borck migration to the United States +

Many Germans emigrated across the Atlantic to seek better lives in North America. This great migration began in the middle of the 17th century and continued into the 20th century. Resettlement was particularly attractive to those from Westphalia as a means of escape from poverty and religious persecution. For many Westphalian farmers, the chance to own one's own land was also a major incentive. The process of the widespread colonization of the United States began in 1650, when many immigrants from Germany settled in pockets in Pennsylvania, Texas, New York, Illinois, and California. In Canada, German settlements centered around Ontario and the Prairie provinces. Among them were:

Borck Settlers in United States in the 17th Century

Borck Settlers in United States in the 18th Century

Borck Settlers in United States in the 19th Century