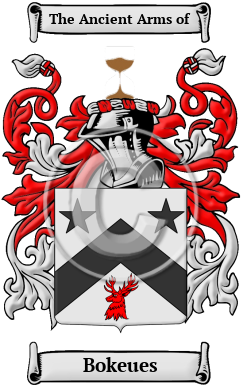 The earliest roots of the name Bokeues are with the Viking settlers of the early Middle Ages; the surname having come from a place named by the Vikings It is a name for someone who lived in a place noted for the presence of a ridge that formed a boundary between two distinct areas. It comes from a variant of the word boak or balk, of the same meaning. While historians generally agree upon the aforementioned topographical derivation, most believe that this name actually came from the area called Boak in the parish of Kirkholm.

Early Origins of the Bokeues family

The surname Bokeues was first found in Berwickshire an ancient county of Scotland, presently part of the Scottish Borders Council Area, located in the eastern part of the Borders Region of Scotland, where they held a family seat from ancient times, long before the Norman Conquest in 1066.

Early History of the Bokeues family

This web page shows only a small excerpt of our Bokeues research. Another 92 words (7 lines of text) covering the years 1546, 1576, 1632, 1683 and are included under the topic Early Bokeues History in all our PDF Extended History products and printed products wherever possible.

Standards against which to judge the accuracy of spellings and translations did not yet exist in the Middle Ages. Spelling variations in names dating from that era, are thus, an extremely common occurrence. Bokeues has been recorded as Boag, Boig, Book, Boack, Boge, Bogue, Boak, Bouk, Bouck, Bogues, Bogg, Boggs and many more.

More information is included under the topic Early Bokeues Notables in all our PDF Extended History products and printed products wherever possible.

Migration of the Bokeues family to Ireland

Some of the Bokeues family moved to Ireland, but this topic is not covered in this excerpt.
Another 57 words (4 lines of text) about their life in Ireland is included in all our PDF Extended History products and printed products wherever possible.

Migration of the Bokeues family

The New World was far from the oppressive regime of the old country. It was a place where there was more land than people and political and religious freedom were far easier to come by. Many Scots even got the chance to fight for their freedom in the American War of Independence. In recent years, interest in this heritage has been generated by Clan societies and regular highland games in North America. An examination of early immigration and passenger lists has revealed many people bearing the Bokeues name: Samuel Boag who settled in Savannah, Georgia, in 1820; Antony Boak arrived in Philadelphia in 1872; John Boag settled in Philadelphia in 1852; Anthony arrived in Philadelphia in 1872.