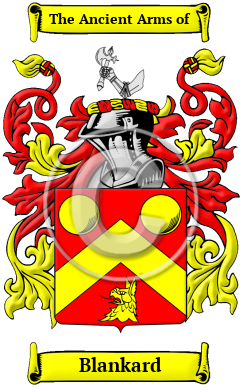 The surname Blankard is derived from a nickname in the Old French. A broad and miscellaneous class of surnames, nickname surnames referred to a characteristic of the first person who used the name. They can describe the bearer's favored style of clothing, appearance, habits, or character.

In the pre-Christian era, many pagan gods and demi-gods were believed to be a mixture of animals and humans, such as the Greek god Pan who was the god of flocks and herds and was represented as a man with the legs, horns and ears of a goat. In the Middle Ages, anthropomorphic ideas, which attributed human qualities and form to gods or animals, were held about the characters of other living creatures. They were based on the creature's habits. Moreover, these associations were reflected in folk tales, mythology, and legends that portrayed animals behaving as humans. The Old French nickname Blankard, meant person with a whitish, or white appearance having derived from the Old French word blanchart. Experts theorize that Blankard may have also been a nickname for someone with an exceptionally pure character, since white was the symbolic color of purity during the Middle Ages. Alternatively, the name could have been a nickname for a "white horse." [1]

Early Origins of the Blankard family

The surname Blankard was first found in Lancashire where they held a family seat from early times at Grimsbargh Hall. "Ponce Blanchard held twelve fees in Hants (Hampshire), granted by Richard I., and Gilbert and William Blanchard had estates in Lincolnshire." [2] Other very early references to the family include: Blanchard de Morba who was listed in the Pipe Rolls of Devon in 1180; Robertus blancard, Rotbertus quippe blancard, who was listed in the Inquisitio Inquests for Suffolk in 1086; and Richard Blanchard who was listed in Pipe Rolls of Lancashire in 1177. The author continues: "The 1086 example is, however, certainly a nickname, probably identical to Robertus Blancardus." [3]

Early History of the Blankard family

This web page shows only a small excerpt of our Blankard research. Another 112 words (8 lines of text) covering the years 1651, 1587 and 1790 are included under the topic Early Blankard History in all our PDF Extended History products and printed products wherever possible.

Notable of this family during the Middle Ages was William Isaac Blanchard (died 1790), an English stenographer. He was son of a French refugee, who became a...
Another 27 words (2 lines of text) are included under the topic Early Blankard Notables in all our PDF Extended History products and printed products wherever possible.

Blankard migration to the United States +

Research into various historical records has revealed some of first members of the Blankard family to immigrate North America:

Blankard Settlers in United States in the 18th Century