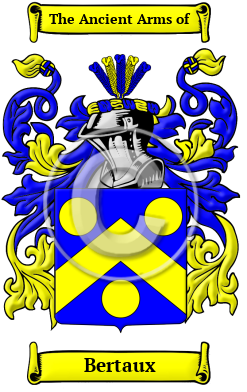 Early Origins of the Bertaux family

The surname Bertaux was first found in Forez, a former province of France, now part of the modern Loire département, the Haute-Loire and Puy-de-Dôme départements, where the family held a family seat since ancient times.

Bertha, Bercta or Adilberga (d. before 616) was the daughter of Haribert, King of the Franks, reigning in Paris and his wife Ingoberg. "The dates of her birth and her marriage are not known. married Æthelberht, king of Kent. Bertha's parents are said to have consented to her marriage on the condition that she and the bishop who should come over with her should be allowed the free exercise of the rites of Christianity. " [1]

Early History of the Bertaux family

In France, the name Bertaux is the 1,892nd most popular surname with an estimated 3,260 people with that name. [2]

Migration of the Bertaux family

Some of the first settlers of this family name or some of its variants were: François Berthelot, aged 48, who settled in Louisiana in 1719; Thomas Bertholt settled in Philadelphia in 1750; Johann Georg Berthold settled in America in 1781.