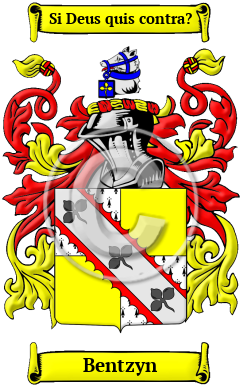 The Bentzyn surname is a patronymic, created from the Medieval given name Benne, which comes from the Latin word "benedictus," which means "blessed." Some instances of the surname may also be derived from the name of the village of Benson (Benington) in Oxfordshire (Bennesingtun in Old English). [1] [2]

While the parish dates back to ancient Roman and Saxon times, it was listed as Baenesington c. 900. By the time of the Domesday Book of 1086, the village was known as Besintone. [3] Literally, the place name means "estate associated with a man called Benesa," from the Old English personal name + "ing" + "tun." [4]

Early Origins of the Bentzyn family

The surname Bentzyn was first found in Oxfordshire, where a Peter de Bensinton was recorded in the Curia Regis Rolls for 1208. [5]

Henry de Benson was recorded in that same county in Oseney, in 1269. A family of the name was established from ancient times in the vicinity of Barrow-in-Furness, Lancashire. The Gildea, Gildee and other spellings were adopted in Ireland and are explained in more detail later.

Some of the family branched in Yorkshire in the early years as Germanus Benson was listed as holding lands there in the Yorkshire Poll Tax Rolls of 1379. [1]

Early History of the Bentzyn family

Before English spelling was standardized a few hundred years ago, spelling variations of names were a common occurrence. Elements of Latin, French and other languages became incorporated into English through the Middle Ages, and name spellings changed even among the literate. The variations of the surname Bentzyn include Benson, Benison, Bensone, Bennison, Gildea, Gilday, Gildee, Bennsone, Bennisoun, Bennisone and many more.

Distinguished members of the family include William Benson (died 1549), an English Benedictine, the last Abbot of Westminster and first Dean of Westminster; John Benson (died 1667), a London publisher, best remembered for an important publication of the Sonnets and miscellaneous poems of William Shakespeare in 1640; Robert Benson (1676-1731), English Member of Parliament, made Chancellor of the Exchequer 1711, created Lord Bingley in 1713; and Edward...
Another 66 words (5 lines of text) are included under the topic Early Bentzyn Notables in all our PDF Extended History products and printed products wherever possible.

Migration of the Bentzyn family to Ireland

Some of the Bentzyn family moved to Ireland, but this topic is not covered in this excerpt.
Another 123 words (9 lines of text) about their life in Ireland is included in all our PDF Extended History products and printed products wherever possible.

Migration of the Bentzyn family

A great wave of immigration to the New World was the result of the enormous political and religious disarray that struck England at that time. Families left for the New World in extremely large numbers. The long journey was the end of many immigrants and many more arrived sick and starving. Still, those who made it were rewarded with an opportunity far greater than they had known at home in England. These emigrant families went on to make significant contributions to these emerging colonies in which they settled. Some of the first North American settlers carried this name or one of its variants: John Benson, Mary Benson and their two children, who arrived in Massachusetts in 1638; Dirck Benson, who came to New York in 1648; Cutbert Benson, who came to Virginia in 1655.

Motto: Si Deus quis contra?
Motto Translation: If God be with us who can be against us?.