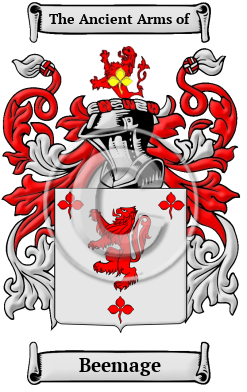 Early Origins of the Beemage family

The surname Beemage was first found in Normandy where the family was formerly Beaumis, Beaumeys, or Beametz and are from Beaumetz, near Abbeville. Today this is a commune in the Somme department in the Picardie (Picardy) region of northern France. When they arrived in Britain is not known but one can safely assume shortly after the Conquest as Richard de Belmiz, Viscount of Salop (Shropshire) witnessed a charter in 1087 of Salop Abbey. Richards be Beaumez witnessed a charter of Henry I., in 1124. Richard be Belmiz was Bishop of London in 1172. [1]

Early History of the Beemage family

Although the name, Beemage, appeared in many references, from time to time, the surname was shown with the spellings Beamish, Beemish, Beames and others.

Notable amongst the family name during their early history was North Ludlow Beamish (1797-1872), military writer and antiquary, the son of William Beamish, Esq., of Beaumont House, co. Cork, and was born on 31 Dec. 1797. In November 1816 he obtained a commission in the 4th royal Irish dragoon guards, in which corps he purchased a troop in 1823. In 1825 he published an English translation of a small cavalry manual written...
Another 72 words (5 lines of text) are included under the topic Early Beemage Notables in all our PDF Extended History products and printed products wherever possible.

Migration of the Beemage family to Ireland

Some of the Beemage family moved to Ireland, but this topic is not covered in this excerpt.
Another 55 words (4 lines of text) about their life in Ireland is included in all our PDF Extended History products and printed products wherever possible.

Migration of the Beemage family

Gradually becoming disenchanted with life in Ireland many of these uprooted families sailed aboard the armada of sailing ships known as the "White Sails" which plied the stormy Atlantic. These overcrowded ships often arrived with only 60 to 70% of their original passenger list, many dying of cholera, typhoid, dysentery or small pox. In North America, some of the first immigrants who could be considered kinsmen of the Beemage family name Beemage, or who bore a variation of the surname were Charles Beamish who settled in Philadelphia, Pennsylvania in 1832; William Beames who settled in Boston Massachusetts in 1651; Robert Beames who settled in Barbados and Jamaica in 1688.