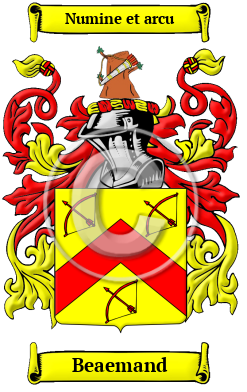 The name Beaemand is another word for the occupational "archer." Or in other words, "a fighting man armed with a bow; one who made bows." [1] It is a fairly "common name on the English border under the Percys, and derived from their weapon-the long bow." [2] At one time, "Bowman was the name of a Border Clan of Northumberland." [3]

Early Origins of the Beaemand family

Early History of the Beaemand family

Notable amongst the family name during their early history was Sir Robert Bowman of Northumberland; Seymour Bowman (c. 1621-1704), an English politician, Member of Parliament for Old Sarum in 1660; and John Bowman (1733-1784), Virginia and Kentucky soldier and official. Henry Bowman published at Oxford in 1677 a thin folio...
Another 49 words (4 lines of text) are included under the topic Early Beaemand Notables in all our PDF Extended History products and printed products wherever possible.

Migration of the Beaemand family to Ireland

Some of the Beaemand family moved to Ireland, but this topic is not covered in this excerpt.
Another 59 words (4 lines of text) about their life in Ireland is included in all our PDF Extended History products and printed products wherever possible.

Migration of the Beaemand family