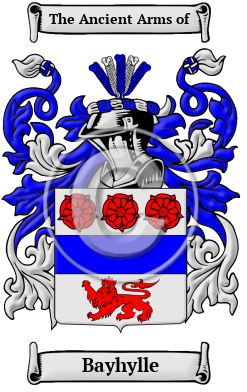 Early Origins of the Bayhylle family

The surname Bayhylle was first found in Burgundy (French: Bourgogne), an administrative and historical region of east-central France, where the family has held a family seat since the early ages.

Early History of the Bayhylle family

Notable amongst the family at this time was Louis-Philibert Baille, Lord of Beauregard, horseman, Artillery Lieutenant, member of the Royal Grenadiers of the County of Bourgogne, Knight of the Royal Order, Soldier of Saint-Louis, Commander, Knight of the Legion of...
Another 39 words (3 lines of text) are included under the topic Early Bayhylle Notables in all our PDF Extended History products and printed products wherever possible.

Migration of the Bayhylle family