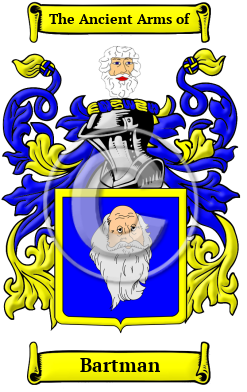 The history of the Bartman family name begins in the German province of Bavaria. Bartman is a nickname surname, a class of German names derived from "eke-names," or added names, that described people by a personal characteristic or other attribute. Bartman is a name for a bearded person, derived from the old German word "Bardo," which means "bearded one." Barthe, a variant of the name, is a French local name for someone who lived on a piece of land overgrown with bushes or shrub.

Early Origins of the Bartman family

The surname Bartman was first found in Bavaria, where the name became noted for its many branches with the region, each house acquiring a status and influence which was envied by the princes of the region. In their later history the family became a power unto itself and they were elevated to the ranks of nobility as they grew into this most influential family.

Early History of the Bartman family

One can encounter great variation in the spelling of surnames: in early times, spelling in general, and thus the spelling of names was not yet standardized; and later, spellings would change with branching and movement of families. Variations of the name Bartman include Barth, Bartmann, Bart, Barthe and others.

Prominent among members of the name Bartman in this period include Kaspar von Barth (1587-1658), who was a very learned and respected philologist in Brandenburg. Jean Bart (1650-1702), was Belgium-born, French sailor who served the French crown as naval commander and privateer. Christian Samuel Barth (1735-1809)...
Another 45 words (3 lines of text) are included under the topic Early Bartman Notables in all our PDF Extended History products and printed products wherever possible.

Bartman migration to the United States +

German settlers were among the most common to come to North America between the mid-17th and mid-20th centuries. Poverty and religious persecution drove many Bavarians to make this long trek. tenant farmers were also enticed by the prospect of owning land. From east to west, these German immigrants populated the United States, settling in Pennsylvania, Texas, New York, Illinois, and California. Ontario and the prairie provinces of Canada also provided homes to many. Early settlers bearing the Bartman surname or a spelling variation of the name include:

Bartman Settlers in United States in the 18th Century

Bartman Settlers in New Zealand in the 19th Century