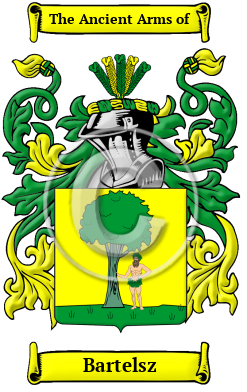 Bavaria, Germany is the original homeland of the Bartelsz family. Bartelsz is a patronymic name, a type of surname that derived from the given name of the father of the original bearer. Bartelsz was derived from the Old German word Bartolomaeus (Bartholomew), which means farmer. Additionally, the name is associated with the famous Saint Bartholomaeus (St. Bartholomew), who was one of the Apostles. Bartelsz is also a nickname type of surname which was originally derived from the Old German word "barta," which means battle-axe, and was a warrior nickname. During the Middle Ages, when feudalism, chivalry, and knighthood characterized Europe, heroic battles over power and prestige were fought between the noble families. In an age of rapidly changing political and religious alliances, the Bartelsz family declared their loyalty to many different nobles and princes who sought their support in the conflicts of the day. Consequently, the Bartelsz family made a vital contribution to the ancient German traditions of military initiation, legality, and chivalry.

Early Origins of the Bartelsz family

The surname Bartelsz was first found in Bavaria, where the name Bartels was anciently associated with the tribal conflicts of the area. They declared allegiances to many nobles and princes of early history, lending their influence in struggles for power and status within the region. They branched into many houses, and their contributions were sought by many leaders in their search for power.

Early History of the Bartelsz family

This web page shows only a small excerpt of our Bartelsz research. Another 99 words (7 lines of text) covering the years 1685, 1707 and 1836 are included under the topic Early Bartelsz History in all our PDF Extended History products and printed products wherever possible.

Many cultural groups lived in the German states in medieval times. Each had its own dialect and traditions, and unique variations of popular names. Low German, which is similar to contemporary Dutch, was spoken in Westphalia. German names are characterized by additions such as regional suffixes and phrases that tell something about the origin or background of its original bearer. Further contributing to the variation in German names was the fact that there were no spelling rules in medieval times: scribes recorded names according to their sound. The recorded spelling variations of Bartelsz include Bartels, Bartells, Bartell, Bartelle, Bartelles, Barthels, Barthel and many more.

More information is included under the topic Early Bartelsz Notables in all our PDF Extended History products and printed products wherever possible.

Bartelsz migration to the United States +

Between the mid-17th and mid-20th centuries, German settlers arrived in North America by the thousands. Persecution based on religion and poverty were great motivators in this large-scale migration. So too was the opportunity for tenant farmers to own their own land. Ample land and opportunity awaited the settlers who went to such states as Pennsylvania, Texas, New York, Illinois, and California, as well as Ontario and the prairie provinces of Canada. Research into the origins of individual families in North America revealed records of the immigration of a number of people bearing the name Bartelsz or a variant listed above:

Bartelsz Settlers in United States in the 17th Century