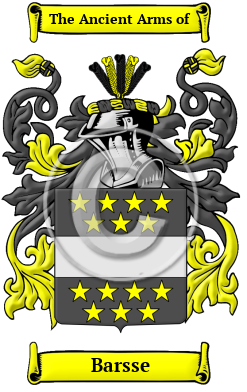 Possible derivations for the Barsse surname include the Middle High German word "bars," meaning "a perch;" thus the name may have been a nickname for someone thought to resemble a fish in some way, or a metonymic occupational name for a fish dealer or fisherman. Or, the name may come from the Low German word "barsch," meaning "harsh," or "rude." In this case, the name would have been a nickname, which became a surname.

Early Origins of the Barsse family

The surname Barsse was first found in Mecklenburg, where the name could be considered to make a great early contribution to the feudal society which became the backbone of early development of Europe. The name became prominent in local affairs and branched into many houses which played important roles in the complex national conflicts, as each group sought power and status in an ever-changing territorial profile.

Early History of the Barsse family

This web page shows only a small excerpt of our Barsse research. Another 91 words (6 lines of text) covering the years 1523, 1600, 1633, 1757 and 1821 are included under the topic Early Barsse History in all our PDF Extended History products and printed products wherever possible.

Another 32 words (2 lines of text) are included under the topic Early Barsse Notables in all our PDF Extended History products and printed products wherever possible.

Migration of the Barsse family