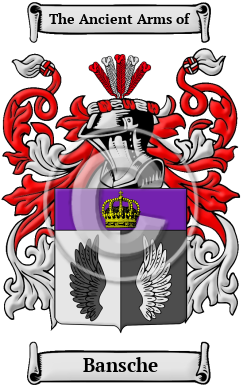 The German surname Bansche emerged in the lands that formed the powerful German state of Prussia, which at one time was an immense German territory that stretched from France and the Low Countries to the Baltic sea and Poland. After the fall of the Roman Empire, the German territories were inhabited by a variety of Barbarian tribes. The borders of the Barbarian kingdoms changed frequently, but the region that became known as Prussia was roughly divided between the areas of Brandenburg-Prussia, West Prussia, and East Prussia. West Prussia, where the distinguished surname Bansche was born, was nestled between Brandenburg and East Prussia on the Vistula River. It is famous for its ancient cities, such as Danzig, which is renowned for its culture and fine displays ofRenaissance art and architecture.

Early Origins of the Bansche family

The surname Bansche was first found in East Prussia, where the name contributed greatly to the development of an emerging nation which would later play a large role in the tribal and national conflicts of the area. In later years the name branched into many houses, each playing a significant role in the local social and political affairs. The name is Slavic in origin.

Early History of the Bansche family

This web page shows only a small excerpt of our Bansche research. Another 51 words (4 lines of text) covering the years 1871 and 1871 are included under the topic Early Bansche History in all our PDF Extended History products and printed products wherever possible.

More information is included under the topic Early Bansche Notables in all our PDF Extended History products and printed products wherever possible.

Bansche migration to the United States +

Bansche Settlers in United States in the 18th Century

Bansche Settlers in United States in the 19th Century