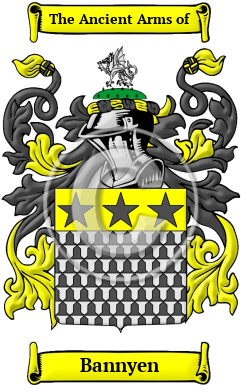 The name Bannyen is from the rugged landscape of Wales. It is a Celtic name that was derived from the Welsh personal name Enion, which was also spelled Einion and Eignon. The surname Bannyen features the distinctive Welsh patronymic prefix ab-. The original form of the name was ab- Enion,but the prefix has been assimilated into the surname over the course of time and the overall spelling has sometimes been extensively altered. [1] [2]

Early Origins of the Bannyen family

"In 1199 one William Buniun held land at Wilstead, a mile from Elstow [Bedfordshire]. In 1327 one of the same name, probably his descendant, William Boynon, was living at the hamlet of Harrowden, at the south-eastern boundary of the parish, close to the very spot which tradition marks out as John Bunyan's birthplace, and which the local names of 'Bunyan's End,' 'Bunyan's Walk,' and 'Farther Bunyan's' (as old, certainly, as the middle of the sixteenth century) connect beyond all question with the Bunyan family. A field known as 'Bonyon's End' was sold in 1548 by 'Thomas Bonyon of Elstow, labourer,' son of William Bonyon, to Robert Curtis, and other portions of his ancestral properly gradually passed to other purchasers, little being left to descend to John Bunyan's grandfather, Thomas Bunyan (d. 1641), save the 'cottage or tenement' in which he carried on the occupation of 'petty chapman,' or small retail trader." [5]

"As Roger and John Buignon were sons of John Buignon, the surname, which has been noted only in Bedfordshire, was already hereditary in 1227 (Assize Rolls of Bedfordshire), when it appears as Buingon, Buinon, Buignon and Bungnon in the neighbourhood of Ampthill and Bedford." [4]

Early History of the Bannyen family

Although there are not an extremely large number Welsh surnames, there are an inordinately large number of spelling variations of those surnames. This variety of spellings began almost immediately after the acceptance of surnames within Welsh society. As time progressed, these old Brythonic names were eventually were recorded in English. This process was problematic in that many of the highly inflected sounds of the native language of Wales could not be properly captured in English. Some families, however, did decide to modify their own names to indicate a branch loyalty within the family, a religious adherence, or even a patriotic affiliation. The name Bannyen has seen various spelling variations: Bunyon, Banyen, Benion, Benyan, Benyon, Bunyan, Bunyen, Banion, Banyan, O'Banion, O'Benyon and many more.

Prominent amongst the family during the late Middle Ages was John Bunyan (1628-1688), author of "Pilgrim's Progress" and many other works. He was born at the village of Elstow, Bedfordshire, a little more than a mile south of the town of Bedford, in November 1628. The family of Buignon, Buniun...
Another 49 words (4 lines of text) are included under the topic Early Bannyen Notables in all our PDF Extended History products and printed products wherever possible.

Migration of the Bannyen family to Ireland

Some of the Bannyen family moved to Ireland, but this topic is not covered in this excerpt.
Another 33 words (2 lines of text) about their life in Ireland is included in all our PDF Extended History products and printed products wherever possible.

Migration of the Bannyen family

In the late 19th and early 20th centuries, many people from Wales joined the general migration to North America in search of land, work, and freedom. These immigrants greatly contributed to the rapid development of the new nations of Canada and the United States. They also added a rich and lasting cultural heritage to their newly adopted societies. Investigation of immigration and passenger lists has revealed a number of people bearing the name Bannyen: Robert Bunyon who settled in Georgia in 1733 with his wife and two daughters; James Bunyon settled in New England in 1764; Anne Bunyon settled in New England in 1754..