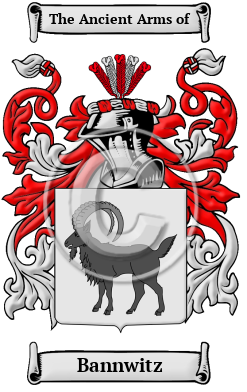 The historic German region of Prussia was the original home of the name Bannwitz. Bannwitz was a local name, a type of hereditary surname that identified people by the places where they lived. Landowners were the first to use local names, which often used the prefix "von," meaning "of" or "from," in some cases a mark of aristocratic birth. Local names are by far the most common type of German hereditary surname. Bannwitz was a name for someone who lived in the village of Bennewitz which is between Halle and Schkeuditz. The oldest branch of the family owned the estate named Beinewitz, which is now Bennewitz near Torgau, since the early 14th century.

Early Origins of the Bannwitz family

The surname Bannwitz was first found in Brandenburg, where this family name became a prominent contributor to the development of the district from ancient times. Always prominent in social affairs, the family became an integral part of that turbulent region as it emerged to form alliances with other families within the Feudal System and the nation. The earliest form of the name was Beinewitz or Bienewitz, and the oldest branch of the family owned the estate Beinewitz (now Bennewitz near Torgau) as early as 1300. Other chronicles suggest that the family originated in the village Bennewitz between Halle and Schkeuditz.

Early History of the Bannwitz family

This web page shows only a small excerpt of our Bannwitz research. Another 133 words (10 lines of text) covering the years 1451, 1541, 1495 and 1592 are included under the topic Early Bannwitz History in all our PDF Extended History products and printed products wherever possible.

One can encounter great variation in the spelling of surnames: in early times, spelling in general, and thus the spelling of names was not yet standardized; and later, spellings would change with branching and movement of families. Variations of the name Bannwitz include Bennewitz, Benwitz, Bennewitts, Benewitz, Bennswitz, Benwitts, Benwitz, Bannwitz, Banwitz, Beinewitz and many more.

More information is included under the topic Early Bannwitz Notables in all our PDF Extended History products and printed products wherever possible.

Migration of the Bannwitz family

Much of German history has been shaped by the state of Prussia. It was an enduring military power until after the Second World War. At that time, the state was abolished altogether and its land divided between the Soviet Union, Poland, East Germany and West Germany. While some Prussians were content to remain in those countries, others moved away, many of them migrating to North America. They entered the United States mostly through Philadelphia, moving on to Ohio, Texas, Illinois, California, New York, and Maryland. Others went to Canada, settling on the prairies and in the province of Ontario. Among those of this surname listed in various historical records were: Theodor Bennewitz, who settled in Texas in 1843 with his wife and child.