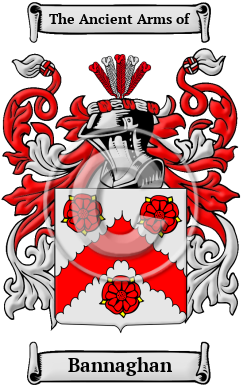 The Bannaghan name is derived from the Gaelic ó Banàin, though there has been much confusion about this name involving the Irish Gaelic word bàn, which means "white."

Early Origins of the Bannaghan family

The surname Bannaghan was first found in the barony of Clonisk, in the southern tip of County Offaly (Irish: Uíbh Fháilí) originally the Kingdom of Uí Failghe, located in central Ireland in the Province of Leinster, where a Medieval Sept of this name was found.

Early History of the Bannaghan family

Another 32 words (2 lines of text) are included under the topic Early Bannaghan Notables in all our PDF Extended History products and printed products wherever possible.

Migration of the Bannaghan family

Some of the first settlers of this family name or some of its variants were: William O'Bannon, who was granted land in Virginia in 1764; Owen Bannon, who was a forced emigrant, arriving in America in 1737; Ann Bannon, who arrived at the port of New York in 1805.