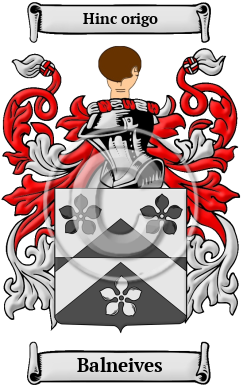 The annals of Scottish history reveal that Balneives was first used as a name by ancestors of the Pictish tribe of ancient Scotland. The Balneives family lived in the lands of Balneaves in the parish of Kinkell in Angus. The name is a topographic or local surname, which was given to a family who held a barony or lands, had houses, manors or estates in the area. Even today, there is a small farm in the area called Balneaves.

Early Origins of the Balneives family

The surname Balneives was first found in Angus (Gaelic: Aonghas), part of the Tayside region of northeastern Scotland, and present day Council Area of Angus, formerly known as Forfar or Forfarshire, where they held a family seat from very ancient times, some say before the eleventh century.

Early History of the Balneives family

This web page shows only a small excerpt of our Balneives research. Another 96 words (7 lines of text) covering the years 1539, 1597, 1587, 1579, 1513, 1542 and 1538 are included under the topic Early Balneives History in all our PDF Extended History products and printed products wherever possible.

Notable amongst the Clan at this time was Henry Balnaves (d. 1579), Scottish reformer, usually described as of 'Halhill' after a small estate belonging to him in Fifeshire. "He was born in Kirkcaldy during the reign of James V of Scotland (1513-1542); but the exact date is unknown. He proceeded in very early youth to the university of St...
Another 58 words (4 lines of text) are included under the topic Early Balneives Notables in all our PDF Extended History products and printed products wherever possible.

Migration of the Balneives family

In those unstable times, many had no choice but to leave their beloved homelands. Sickness and poverty hounded travelers to North America, but those who made it were welcomed with land and opportunity. These settlers gave the young nations of Canada and the United States a strong backbone as they stood up for their beliefs as United Empire Loyalists and in the American War of Independence. In this century, the ancestors of these brave Scots have begun to recover their illustrious heritage through Clan societies and other heritage organizations. Early passenger and immigration lists reveal many Scottish settlers bearing the name Balneives: Richard Benes who settled in Barbados in 1635; Bennett Bennes settled in Virginia in 1652; Ann Bennes settled in Virginia in 1654; John Bennes landed in Philadelphia, Pennsylvania in 1868..