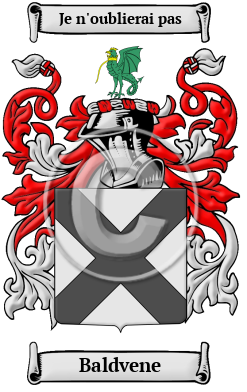 Baldvene is an ancient name whose history on English soil dates back to the wave of emigration that followed the Norman Conquest of England in 1066. The name comes from the Germanic elements bald, which means bold, and wine, which means friend or protector.

"Baldwin of Moeles (d. 1100?) was the second son of Gilbert, count of Eu, who was a grandson of Richard the Fearless, and one of the guardians of the youth of William the Conqueror. " [1]

Baldwin (d. 1191), Archbishop of Canterbury, was born at Exeter of poor parents. "He received an excellent education, both in secular and religious learning, and bore a high character. " [1] "Archbishop Baldwin, who died at Tyre in 1191, while engaged on a crusade." [2]

Early Origins of the Baldvene family

The surname Baldvene was first found in Shropshire, where this ancient family "was early seated at Diddlebury, (or Delbury,) in Coverdale, which appears to have come from the heiress of Wigley. Robert Baldwin of Diddlebury died anno 1398, and was ancestor of the family." [3]

"The Sieur de Baudewin, whose name occurs of the Roll [of Battle Abbey] became after the battle of Hastings Catellan of Montgomery. There scarcely exists a doubt that this Norman Chief was patriarch of the ancient family of Bawdewin, or Baldwyn. " [4]

"The parish [of Witsbury in Wiltshire] formed part of the possessions of Breamore Priory, founded by Baldwin de Redveriis in the reign of Henry I. It is situated on the highest land between Hants and Wilts, commanding an extensive view of the New Forest, and southward to the sea over a wide tract of fertile country." [5]

"Baldwin the Sheriff, or Baldwin de Redvers (otherwise De Sap, or De Brioniis), was the most important feudal lord in Devon. No fewer than 181 manors fell to his share in this county alone. Ninety-two fees were held of this barony. Here in the centre of his domains, in the very heart of Devon, commanding the passes to the north and west of Dartmoor, and dominating the district far away to the Severn Sea, he reared his castle. None of his masonry remains ; but the site is that which he chose, the mound is that which he scarped and isolated from the hillside, of which it formed a rocky spur ; and the surroundings have changed little from the day when the square Norman keep first frowned upon the brawling waters of the rapid Ockrent [River] in the valley below. " [2]

Early History of the Baldvene family

Endless spelling variations are a prevailing characteristic of Norman surnames. Old and Middle English lacked any definite spelling rules, and the introduction of Norman French added an unfamiliar ingredient to the English linguistic stew. French and Latin, the languages of the court, also influenced spellings. Finally, Medieval scribes generally spelled words according to how they sounded, so one person was often referred to by different spellings in different documents. The name has been spelled Baldwin, Baldwine, Baldwyn, Baldwyne, Baldwynn and others.

Outstanding amongst the family at this time was John Baldwin (d. 1545), Chief Justice of the Common Pleas, a member of the Inner Temple. William Baldwin or Bawden (1563-1632), was a Jesuit and native of Cornwall. Another William Baldwin (fl...
Another 38 words (3 lines of text) are included under the topic Early Baldvene Notables in all our PDF Extended History products and printed products wherever possible.

Migration of the Baldvene family to Ireland

Some of the Baldvene family moved to Ireland, but this topic is not covered in this excerpt.
Another 185 words (13 lines of text) about their life in Ireland is included in all our PDF Extended History products and printed products wherever possible.

Migration of the Baldvene family

To escape the political and religious persecution within England at the time, many English families left for the various British colonies abroad. The voyage was extremely difficult, though, and the cramped, dank ships caused many to arrive in the New World diseased and starving. But for those who made it, the trip was most often worth it. Many of the families who arrived went on to make valuable contributions to the emerging nations of Canada and the United States. An inquiry into the early roots of North American families reveals a number of immigrants bearing the name Baldvene or a variant listed above: George Baldwin who settled in Boston Massachusetts in 1620; Edward who settled in Virginia in 1650; and Richard in Boston in 1638. In Newfoundland, Mary and Richard were planters in 1724 in Placienta.