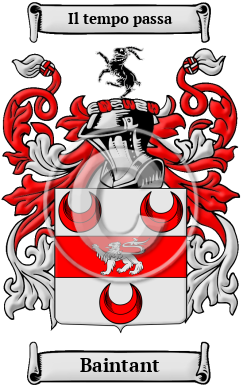 Early Origins of the Baintant family

The surname Baintant was first found in Northumberland, where Osgode on Badingtune was listed there in 972. [1] Bainton (St. Mary), is a parish, in the union of Stamford, soke of Peterborough in Northumberland. Bainton is also found in Oxfordshire, Cambridgeshire and Yorkshire [2] as the place name literally means "estate associated with a man called Bada," from the Old English personal name + "-ing" + "tun." [3] Cambridgeshire has the oldest listing of the place name c. 980 when it was spelt Badingtun.

Early History of the Baintant family

Although the name, Baintant, appeared in many references, from time to time, the surname was shown with the spellings Baynton, Bayntun, Bainton, Bainten, Banting, Baynten and many more.

Migration of the Baintant family

Gradually becoming disenchanted with life in Ireland many of these uprooted families sailed aboard the armada of sailing ships known as the "White Sails" which plied the stormy Atlantic. These overcrowded ships often arrived with only 60 to 70% of their original passenger list, many dying of cholera, typhoid, dysentery or small pox. In North America, some of the first immigrants who could be considered kinsmen of the Baintant family name Baintant, or who bore a variation of the surname were Hester Baynton who settled in Virginia in 1725; William Baynton who settled in Philadelphia, Pennsylvania in 1720; Henry Bayntin settled in Newbern in 1820..