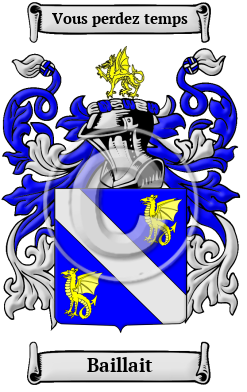 Early Origins of the Baillait family

The surname Baillait was first found in Burgundy (French: Bourgogne), an administrative and historical region of east-central France, where this esteemed family has been traced from ancient times.

Early History of the Baillait family

Notable amongst the family at this time was Adrien Baillet (1649-1706), a French scholar and critic, best known as a biographer of René Descartes; Philippe Baillet, Councillor of the Grand Council, President of the Chamber of Requests of the Palace of Dijon, Knight of Saint-Michel, Captain, Governor of Saint-Jean-de-Losne. Pierre Marie François de Sales Baillot "takes a prominent place among the great French violin-players. He was born Oct. 1, 1771, at Passy, near Paris, where his father kept a school. He showed very early remarkable musical talent, and got his first instruction on the violin from an Italian named Polidori. In 1780...
Another 189 words (14 lines of text) are included under the topic Early Baillait Notables in all our PDF Extended History products and printed products wherever possible.

Migration of the Baillait family