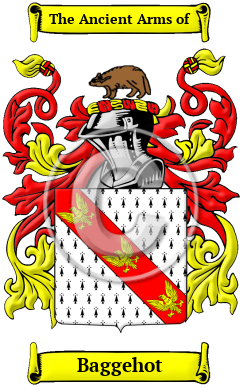 The name Baggehot is part of the ancient legacy of the Anglo-Saxon tribes of Britain. The name was taken on by someone who worked as a peddler who would travel buying and selling goods for profit. Another source claims the name was derived from the French word bagagier, or baggage-carrier. [1] A 'badger,' a hawker, was also a dealer in corn and other commodities, buying in one place to sell in another. [2]

Early Origins of the Baggehot family

The surname Baggehot was first found in Yorkshire where one of the first records of the name was Richard le Bagger, who was listed on the Assize Rolls of Lancashire in 1246 and later in Yorkshire in 1297. Later Yorkshire rolls included Adam Badger in 1324. [3]

Badger was a Warwickshire name in the reign of Henry VIII.. There was a Thomas le Baggere in the adjoining county of Oxford in the 13th century. [4]

Early feudal rolls provided the king of the time a method of cataloguing holdings for taxation, but today they provide a glimpse into the wide surname spellings in use at that time. The Hundredorum Rolls of 1273 included Thomas le Baggere, Oxfordshire and later the Lay Subsidy Rolls listed Robert le Bagger, Lancashire, 1333. The Yorkshire Poll Tax Rolls of 1379 listed Willelmus Bagger; and Ricardus Badger. [2]

Interestingly, none of the dozen or so sources we consulted felt the name could have derived from badger, the animal.

Early History of the Baggehot family

Before English spelling was standardized a few hundred years ago, spelling variations of names were a common occurrence. Elements of Latin, French and other languages became incorporated into English through the Middle Ages, and name spellings changed even among the literate. The variations of the surname Baggehot include Badger, Badge, Bagehot, Baghot, Badghot and others.

Distinguished members of the family include George Badger, English bookseller in London who held a shop at St. Dunstan's Churchyard in 1641 and later at St. Dunstan's Churchyard, Fleet Street, 1641-1651. He is thought to have been a relation of Richard Badger [q. v.] and Thomas Badger [q. v.]. Richard Badger was the son of John Badger, of Stratford-upon-Avon. The parish registers of the town do not confirm this, the only entries of a Richard Badger being Richard, son to George Badger, born September 14th, 1580, and another son of the same name, born August 17th, 1585. There is no mention...
Another 142 words (10 lines of text) are included under the topic Early Baggehot Notables in all our PDF Extended History products and printed products wherever possible.

Migration of the Baggehot family

A great wave of immigration to the New World was the result of the enormous political and religious disarray that struck England at that time. Families left for the New World in extremely large numbers. The long journey was the end of many immigrants and many more arrived sick and starving. Still, those who made it were rewarded with an opportunity far greater than they had known at home in England. These emigrant families went on to make significant contributions to these emerging colonies in which they settled. Some of the first North American settlers carried this name or one of its variants: Giles Badger who settled in New England in 1620; the same year as the "Mayflower"; Ann Badger settled in Virginia in 1639; William Badger settled in Nevis in 1670.