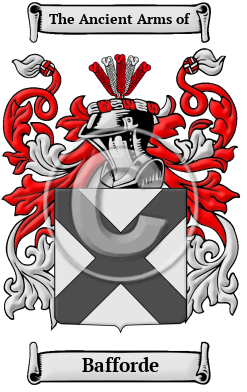 There are two distinct sources for the Bafforde surname. Some instances of the surname come from the Old French word "pafard," meaning "shield," and as such, the name may have been a Norman nickname or occupational name either a soldier or an armorer. The name is also thought to have come from either of two minor places in Devon: Pafford in Moretonhampstead or Parford in Drewsteignton, both are derived from the Old English words "pæð" meaning "path," and "ford," meaning "a ford," that is, a low spot where a river may be crossed.

Early Origins of the Bafforde family

The surname Bafforde was first found in Nottinghamshire where they held a family seat as Lords of the Manor. The Saxon influence of English history diminished after the Battle of Hastings in 1066. The language of the courts was French for the next three centuries and the Norman ambience prevailed. But Saxon surnames survived and the family name was first referenced in the 13th century when they held estates in that shire.

Early History of the Bafforde family

Before English spelling was standardized a few hundred years ago, spelling variations of names were a common occurrence. Elements of Latin, French and other languages became incorporated into English through the Middle Ages, and name spellings changed even among the literate. The variations of the surname Bafforde include Bafford, Bafforde, Baford, Bayford, Bafore, Pafford and many more.

More information is included under the topic Early Bafforde Notables in all our PDF Extended History products and printed products wherever possible.

Migration of the Bafforde family

A great wave of immigration to the New World was the result of the enormous political and religious disarray that struck England at that time. Families left for the New World in extremely large numbers. The long journey was the end of many immigrants and many more arrived sick and starving. Still, those who made it were rewarded with an opportunity far greater than they had known at home in England. These emigrant families went on to make significant contributions to these emerging colonies in which they settled. Some of the first North American settlers carried this name or one of its variants: Fred Paffard, and Henry Paffard, who were both on record in the census of Ontario, Canada of 1871; and Thomas Pafford, a bonded passenger who was sent to Barbados or Jamaica in 1688..