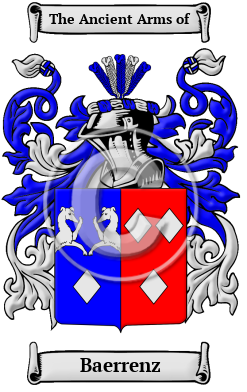 The German states are the glorious birthplace of the distinguished surname Baerrenz. In the medieval era, after the fall of the Roman Empire, the German lands were inhabited by a variety of Barbarian tribes, who fought amongst themselves for control of the land. At this time, the surname Baerrenz emerged throughout the German territories.

Early Origins of the Baerrenz family

The surname Baerrenz was first found in Schleswig-Holstein, where the name Berens emerged in mediaeval times as one of the notable families of the region. From the 13th century the surname was identified with the great social and economic evolution which made this territory a landmark contributor to the development of the nation.

Early History of the Baerrenz family

This web page shows only a small excerpt of our Baerrenz research. Another 80 words (6 lines of text) covering the years 1752, 1597, 1594, 1658 and 1722 are included under the topic Early Baerrenz History in all our PDF Extended History products and printed products wherever possible.

Notables of the time with the name Baerrenz included Willem Barents (d. 1597), Dutch navigator. In 1594, Barents set sail in search of a north-east passage to eastern Asia, but was forced to abandon the effort after reaching Novaya Zemlya. The following year...
Another 42 words (3 lines of text) are included under the topic Early Baerrenz Notables in all our PDF Extended History products and printed products wherever possible.

Migration of the Baerrenz family