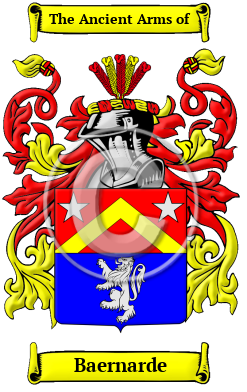 The prestigious family surname Baernarde originated in the territory that eventually became the German state of Prussia. In the 19th century, this state was virtually unrivalled militarily, and its rapid industrial growth made it a contender for economic superiority in Europe as well. However, in the medieval era, Prussia was fragmented and inhabited by numerous barbarian tribes, who fought amongst themselves for control of the land. The borders of the barbarian kingdoms, which were established after the fall of the Roman Empire, changed repeatedly. The region that came to be known as Prussia was roughly divided between the territories of Brandenburg-Prussia, West Prussia and East Prussia. The Baernarde family emerged in Brandenburg-Prussia, which is essentially the birthplace of modern Germany. By the 19th century, Brandenburg-Prussia had incorporated East Prussia, West Prussia and many other German territories. Moreover, in the late 19th century, it led the German states in the unification of Germany.

Early Origins of the Baernarde family

The surname Baernarde was first found in Prussia, where the name Bernard came from humble beginnings but gained a significant reputation for its contribution to the emerging mediaeval society. It later became more prominent as many branches of the same house acquired estates in new areas which, combined with their great contributions to society, served to elevate their social status.

Early History of the Baernarde family

In the medieval era, many different cultural groups lived in the German states. There are thus many regional variations of German surnames from that era. Westphalians spoke Low German, which is similar to modern Dutch. Many German names carry suffixes that identify where they came from. Others have phrases attached that identify something about the original bearer. Other variations in German names resulted from the fact that medieval scribes worked without the aid of any spelling rules. The spelling variations of the name Baernarde include Bernard, Bernardt, Bernarde, Bernards, Bernart, Bernarts, Bernnardt, Barnard, Baernard, Barnardt, Baernardt, Barnarde, Baernarde, Barnards, Baernards, Barnart, Baernart, Barnarts, Baernarts, Barnnardt and many more.

Notable figures of the time with the name Baernarde were Christoph Bernhard (1628-1692), Pomeranian singer and assistant kapellmeister in Dresden in 1655; Joseph Bernard, who received his barony in 1744; Matvey Ivanovich Bernard (1794-1871), Russian...
Another 34 words (2 lines of text) are included under the topic Early Baernarde Notables in all our PDF Extended History products and printed products wherever possible.

Migration of the Baernarde family

Since medieval times, the state of Prussia has played an important part in the history of Germany. The state's military powers were historically very strong, and endured until after the Second World War, when the territory was broken up and divided between the Soviet Union, Poland, East Germany and West Germany. A spurt of migration followed, with some Prussians going elsewhere in Europe and many others crossing the ocean to North America. Most entered the United States through Philadelphia. Some remained there, while more moved on to the states of Ohio, Texas, Illinois, California, New York, and Maryland. Others traveled to Canada and settled Ontario and the prairie provinces. Research into the origins of individual families in North America revealed records of the immigration of a number of people bearing the name Baernarde or a variant listed above: William Barnard who arrived in Virginia in 1622; John Bernard who arrived in Watertown, Massachusetts in 1634; Thomas Bernard came to Virginia in 1638.