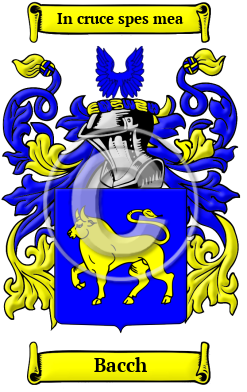 The ancestral home of the Bacch family is in the German state of Bavaria. The name Bacch is an occupational hereditary surname, a type of surname that was taken from a word describing or common to the profession of the original bearer. It is a name for a baker in Old German. Bacch is also a German local name for someone who lived by a stream, which was originally derived from the German word "bach" which means stream.

Early Origins of the Bacch family

The surname Bacch was first found in Augsburg, Bavarian Swabia, where the family gained a significant reputation for its contributions to the emerging mediaeval society. The name became prominent as many branches of the family founded separate houses and acquired estates in various regions, always elevating their social status by their great contributions to society.

Early History of the Bacch family

One can encounter great variation in the spelling of surnames: in early times, spelling in general, and thus the spelling of names was not yet standardized; and later, spellings would change with branching and movement of families. Variations of the name Bacch include Bach, Bache, Bacher, Baechle, Bachle, Back, Backe, Bacch, Bacche, Baach, Baacher and many more.

Prominent among members of the name Bacch in this period include Johann (Johannes) Bach (1604-1673), a German composer and musician of the Baroque; and Johann Sebastian Bach (1685-1750), who is considered by many to be the supreme giant of musical history. Of his twenty children, Karl Philipp Emanuel (1714-1788) was possibly the greatest composer, and may have exerted a stronger influence on Viennese classicism than his...
Another 66 words (5 lines of text) are included under the topic Early Bacch Notables in all our PDF Extended History products and printed products wherever possible.

Migration of the Bacch family

German settlers were among the most common to come to North America between the mid-17th and mid-20th centuries. Poverty and religious persecution drove many Bavarians to make this long trek. tenant farmers were also enticed by the prospect of owning land. From east to west, these German immigrants populated the United States, settling in Pennsylvania, Texas, New York, Illinois, and California. Ontario and the prairie provinces of Canada also provided homes to many. Early settlers bearing the Bacch surname or a spelling variation of the name include: Andreas Bach, who arrived in Philadelphia in 1768; Gabriel Bach came to Georgia in 1734; Johan Bach settled in Philadelphia in 1744; Thos Bach came to Virginia in 1638..

Motto: In cruce spes mea
Motto Translation: In the cross is my hope.