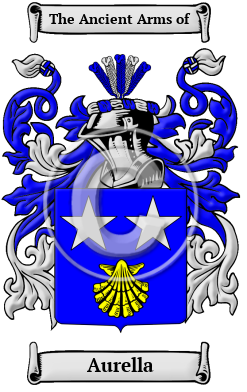 Early Origins of the Aurella family

The surname Aurella was first found in Padua (Italian: Padova, Latin: Patavium, Venetian: Padoa), on the Bacchiglione River, capital of the province of Padua. In 1175, the citizens elected the D'Este family as podesta but in 1275 Frederick II took over. The powerful families of D'Este, Camposampiero and Da Romano were the large influences. The city is rich in art, museums and galleries. Many churches exhibit works of the masters. In those ancient times only persons of rank, the podesta, clergy, city officials, army officers, artists, landowners were entered into the records. To be recorded at this time, at the beginning of recorded history, was of itself a great distinction and indicative of noble ancestry.

Early History of the Aurella family

This web page shows only a small excerpt of our Aurella research. Another 94 words (7 lines of text) covering the years 120 and 1207 are included under the topic Early Aurella History in all our PDF Extended History products and printed products wherever possible.

More information is included under the topic Early Aurella Notables in all our PDF Extended History products and printed products wherever possible.

Migration of the Aurella family

Some of the first settlers of this family name or some of its variants were: Fredrika Aurora, who came to Boston in 1849.