The Arz surname comes from the Middle High German word "arzet," which meant "a physician." It came into being as a family name in the 1300s, and was generally taken on not by full-time doctors, but by someone who practiced the healing arts.

Early Origins of the Arz family

The surname Arz was first found in southern Tyrol, where this ancient family had their seat and noble titles since the 11th century. Their ancestral castle lies in the Castelfondo region, and chronicles mention the Countess Himeltrud von Arz, who married Percifal von Kaldoess around 1007. The Bishop Vigilius of Trento lent the family lands in Kaltern, and Kaiser Friedrich I gave Ullrich and Arnold von Arz the castle "Arz" in 1185. Later, the main line of this family became known as Arz von Wasegg.

Early History of the Arz family

This web page shows only a small excerpt of our Arz research. Another 125 words (9 lines of text) covering the years 1703, 1812, and 1842 are included under the topic Early Arz History in all our PDF Extended History products and printed products wherever possible. 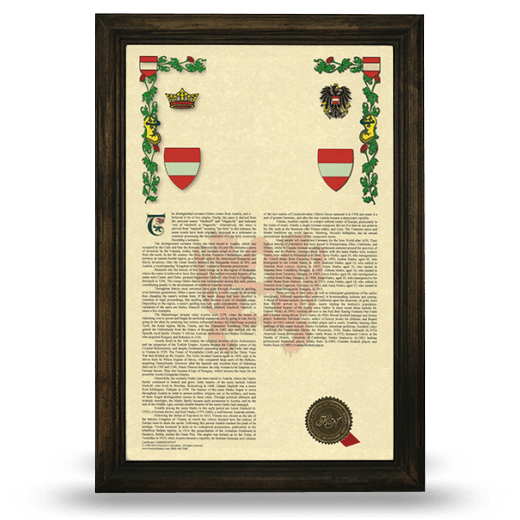 Another 31 words (2 lines of text) are included under the topic Early Arz Notables in all our PDF Extended History products and printed products wherever possible.

Migration of the Arz family