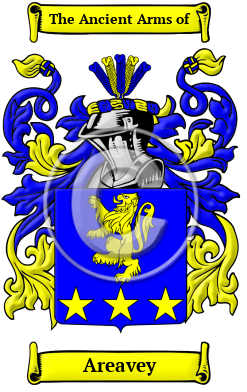 The name Areavey has seen many modifications since the time in which it was first devised. In Gaelic it appeared as Mac Giolla Rua, which means son of the red-haired youth.

Early Origins of the Areavey family

The surname Areavey was first found in County Clare (Irish: An Clár) located on the west coast of Ireland in the province of Munster, where they were the Chiefs of Clonderlaw, conjecturally descended from Tiobraid, son of Iral Glunmhar, King of Ulster. [1]

Early History of the Areavey family

This web page shows only a small excerpt of our Areavey research. Another 148 words (11 lines of text) covering the years 1376, 1638 and 1640 are included under the topic Early Areavey History in all our PDF Extended History products and printed products wherever possible.

In the Middle Ages, a name was often recorded under several different spelling variations during the life of its bearer. Literacy was rare at that time and none of the languages to be found in the British Isles had achieved any great semblance of standardization. Variations of the name Areavey found include Gilroy, Kilroy, MacGilroy, MacElroy, MacGreevy, Greevy, MacGilrea, McGilroy, McElroy, McGreevy, McGilrea, MacIlrea, McIlrea, Magilroy, Magilrea, MacElry, McElry, MacIlree and many more.

More information is included under the topic Early Areavey Notables in all our PDF Extended History products and printed products wherever possible.

Migration of the Areavey family

Ireland experienced a dramatic decrease in its population during the late 19th century. This was in a great measure, a response to England's imperialistic policies. Hunger and disease took the lives of many Irish people and many more chose to leave their homeland to escape such hunger and disease. North America with its promise of work, freedom, and land was an extremely popular destination for Irish families. For those families that survived the journey, all three of these things were were often attained through much hard work and perseverance. Research into early immigration and passenger lists revealed many immigrants bearing the name Areavey: John MacElroy, who landed in Pennsylvania in 1798; and James Gilroy, who settled in Pennsylvania in 1864; they also settled in Massachusetts, New York, and California between 1765 and 1854. The Kilroys also settled in the above states between the same periods. The 1984 edition of the &quot.