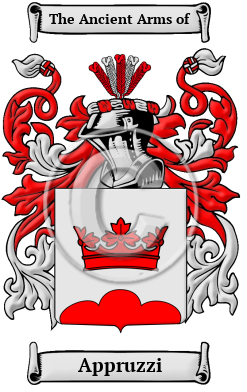 Early Origins of the Appruzzi family

The surname Appruzzi was first found in the area of Abruzzi, in the Papal States, from which the family took their name. It is most likely that the family left this area and then took the name Abruzzi, as in "the person from Abruzzi." The name quickly spread through the peninsular part of Italy and it can be found throughout Italy today. The variations of the name which end in "i" tend to be from the north, while those ending in "o" are from the south.

Early History of the Appruzzi family

This web page shows only a small excerpt of our Appruzzi research. Another 49 words (4 lines of text) covering the years 1480 and 1545 are included under the topic Early Appruzzi History in all our PDF Extended History products and printed products wherever possible.

Surnames that originated in Italy are characterized by an enormous number of spelling variations. Some of these are derived from regional traditions and dialects. Northern names, for instance, often end in "o", while southern names tend to end in "i". Other variations come from the fact the medieval scribes tended to spell according to the sound of words, rather than any particular set of rules. The recorded variations of Appruzzi include Abruzzese, Abruzzi, Abruzzo, Abbruzzi, Abbruzzo, Apruzzi, Appruzzi, Abruzzesi, Abbruzzese, Abbruzzesi, Apruzzese, Bruzzese, Bruzzesi, Bruzi and many more.

More information is included under the topic Early Appruzzi Notables in all our PDF Extended History products and printed products wherever possible.

Migration of the Appruzzi family

Early North American immigration records have revealed a number of people bearing the name Appruzzi or a variant listed above: Benedetto Abruzzo and his six year-old son Antonio, who arrived in New York on board the S.S. Olympia in 1896.