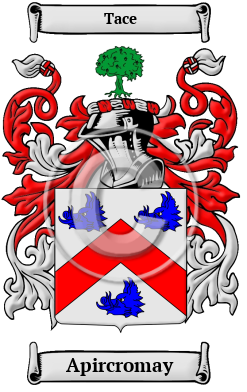 In Scottish history, few names go farther back than Apircromay, whose ancestors lived among the clans of the Pictish tribe. They lived in Fife from a place named Abercrombie (earlier Abarcrumbach), which is of Pictish origin, meaning "a place on the bendy river" or "crooked marsh." [1]

Early Origins of the Apircromay family

The surname Apircromay was first found in the county of Fifeshire (Gaelic: Fìobh), in southeastern Scotland; an ancient Pictish kingdom, known as Fib, and still commonly known as the Kingdom of Fife. Arguably, the first mention of the Clan was in the Ulster Chronicle as one of the clans that King Malcolm Ceanmore took north to quell the claims of MacBeth for the throne of Scotland in 1057. Today, Abercrombie, or St. Monan's, is a parish, in the district of St. Andrew's.

Early History of the Apircromay family

The arts of spelling and translation were yet in their infancies when surnames began, so there are an enormous number of spelling variations of the names in early Scottish records. This is a particular problem with Scottish names because of the numerous times a name might have been loosely translated to English from Gaelic and back. Apircromay has been spelled Abercrumby, Abircrumby, Abbircummy, Abbircromby, Abircombie, Abircromy, Abircrommbie, Abircromby, Abircrumme, Abircrumbye, Abercrombie, Abercromby, Abyrcrumby, Abyrcrumbie, Abbercrumbie, Abbercrommie, Ebercrombie and many more.

Notable amongst the Clan at this time was John Abercromby (d. 1561), Scottish monk of the Order of St. Benedict, a staunch opponent of the doctrines of the Reformation, and on that account was condemned to death and executed about the year 1561. [4] Robert Abercromby (1534-1613), a Scotch Jesuit, who, after entering the order, spent twenty-three years in assisting Catholics abroad, and nineteen years on the Scotch mission, where he suffered imprisonment. [4] Sir Alexander Abercromby of Birkenbog, 1st Baronet (c.1603-1684), was a Scottish politician; David Abercromby (died c. 1702), was a Scottish physician and writer. Patrick Abercomby (1656-1716?), was a Scottish...
Another 142 words (10 lines of text) are included under the topic Early Apircromay Notables in all our PDF Extended History products and printed products wherever possible.

Migration of the Apircromay family

This oppression forced many Scots to leave their homelands. Most of these chose North America as their destination. Although the journey left many sick and poor, these immigrants were welcomed the hardy with great opportunity. Many of these settlers stood up for their newfound freedom in the American War of Independence. More recently, Scots abroad have recovered much of their collective heritage through highland games and other patriotic functions and groups. An examination of passenger and immigration lists has located various settlers bearing the name Apircromay: Hugh Abercrombie who arrived in Charles Town in South Carolina in 1772; John in Philadelphia, Pennsylvania in 1778; Mary in Maryland in 1775; John Abercromby in Jamaica in 1716.