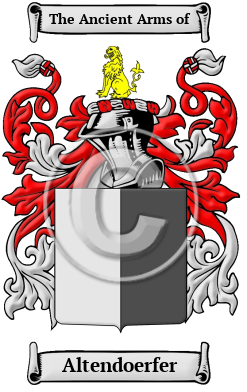 The name Altendoerfer comes from the German region of Westphalia. The tradition of adopting hereditary surnames came to Germany after the 12th century, and the names of places where people lived were a primary source. Many local names carry the prefix "von", meaning "of" or "from," which was originally an indicator of land ownership, and is sometimes a mark of nobility. The Altendoerfer family originally lived in one of the numerous villages named Dorff scattered throughout the German states. Many German family names were derived from the names of small villages, royal or noble households, and even large religious dwellings.

Early Origins of the Altendoerfer family

The surname Altendoerfer was first found in Westphalia, where the name was closely identified in early mediaeval times with the feudal society which would become prominent throughout European history. The name would later emerge as a noble family with great influence, having many distinguished branches, and become noted for its involvement in social, economic and political affairs.

Early History of the Altendoerfer family

This web page shows only a small excerpt of our Altendoerfer research. Another 75 words (5 lines of text) covering the years 1480, 1538 and 1369 are included under the topic Early Altendoerfer History in all our PDF Extended History products and printed products wherever possible.

In the medieval era, many different cultural groups lived in the German states. There are thus many regional variations of German surnames from that era. Westphalians spoke Low German, which is similar to modern Dutch. Many German names carry suffixes that identify where they came from. Others have phrases attached that identify something about the original bearer. Other variations in German names resulted from the fact that medieval scribes worked without the aid of any spelling rules. The spelling variations of the name Altendoerfer include Aldendorf, Altendorf, Altendorff, Aldenndorp, Alldendorp, Aldendorf, Aldendorps, Altendoerfer and many more.

Another 34 words (2 lines of text) are included under the topic Early Altendoerfer Notables in all our PDF Extended History products and printed products wherever possible.

Migration of the Altendoerfer family

For many Germans, emigration to North America was an inviting alternative to the trials of life in the old country. From the mid-17th into the present century, thousands of Germans migrated across the Atlantic. They capitalized on the chance to escape poverty and persecution, and to own their own land. After 1650, Germans settled throughout the states of Pennsylvania, Texas, New York, Illinois, and California. Many also landed in Canada, settling in Ontario or father west on the rich land of the prairies. Among them: Anderas Altendorff, who settled in Philadelphia in 1751. Peter Altdorfer came to Philadelphia in 1839; as did Christian Altdoerfer in 1856.