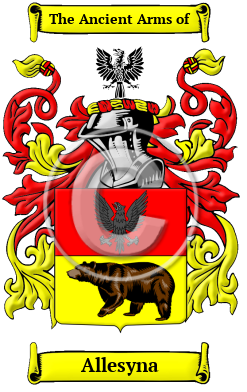 The ancient roots of the Allesyna family are found in the German state of Bavaria. The Allesyna surname, was a local name, for someone who lived in Frankfurt, where the family was found since the early Middle Ages.The family name Allesyna can be traced back to the Middle Ages, when this area was a region characterized by feudalism and chivalry.

Early Origins of the Allesyna family

The surname Allesyna was first found in Frankfurt, where the family name was anciently associated with the tribal conflicts of the area. They declared allegiances to many nobles and princes of early history, lending their influence in struggles for power and status within the region. They branched into many houses, and their contributions were sought by many leaders in their quest to enhance their power.

Early History of the Allesyna family

This web page shows only a small excerpt of our Allesyna research. Another 86 words (6 lines of text) covering the years 1816 and 1844 are included under the topic Early Allesyna History in all our PDF Extended History products and printed products wherever possible.

One can encounter great variation in the spelling of surnames: in early times, spelling in general, and thus the spelling of names was not yet standardized; and later, spellings would change with branching and movement of families. Variations of the name Allesyna include Alesina, Allisina, Allesyna, Allesinna, Alesinna and others.

More information is included under the topic Early Allesyna Notables in all our PDF Extended History products and printed products wherever possible.

Migration of the Allesyna family

German settlers were among the most common to come to North America between the mid-17th and mid-20th centuries. Poverty and religious persecution drove many Bavarians to make this long trek. tenant farmers were also enticed by the prospect of owning land. From east to west, these German immigrants populated the United States, settling in Pennsylvania, Texas, New York, Illinois, and California. Ontario and the prairie provinces of Canada also provided homes to many. Early settlers bearing the Allesyna surname or a spelling variation of the name include: settlers who established themselves along the eastern seaboard of United States and in Canada during the 18th and 19th centuries.