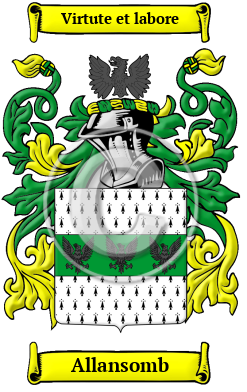 The history of the name Allansomb began when it was derived from the given name Alan, meaning little rock. Patronymic surnames arose out of the vernacular and religious given name traditions. St. Alan was a Welsh and Breton saint and was very popular among the people of those two cultures.

Early Origins of the Allansomb family

The surname Allansomb was first found in Yorkshire where they held a family seat at Richmond, but following the pattern of many Norman and Breton families, junior branches of this distinguished name moved northward over the border into Scotland. They appeared to have settled in Dumbartonshire in Scotland. This is where we found the first records of the family. "Reginald filius Alani was a burgess of Aberdeen in 1317 and a few years later, another Ada filius Alani de Dunbretane witnessed a charter by Donald, earl of Lennox after 1334 and in the reign of Robert I the 20 pound land of Sproustoun was forfeited by John, Thomas, and William filii Alani. " [1]

Further south in their native Yorkshire, Johannes Alynson and Robertus Alaynson were both listed in the Yorkshire Poll Tax Rolls of 1379. [2]

Early History of the Allansomb family

The Old and Middle English languages lacked definite spelling rules, and therefore, Breton surnames have many spelling variations. Latin and French, which were the official court languages, were also influential on the spelling of surnames. The spelling of surnames was rarely consistent in medieval times, and scribes and church officials recorded names as they sounded rather than adhering to any specific spelling rules. Therefore, it was common to find the same individual referred to with different spellings of their surname in the ancient chronicles. Moreover, a large number of foreign names were brought into England after the Norman Conquest, which accelerated and accentuated the alterations to the spelling of various surnames. The name has been spelled Allanson, Alanson, Allansone, Alansone, Allansoune and many more.

Notable of this family during the Middle Ages was Sir William Allanson (died 1656), an English merchant draper and politician who sat in the House of Commons from 1640 to 1653. He became a freeman of the...
Another 37 words (3 lines of text) are included under the topic Early Allansomb Notables in all our PDF Extended History products and printed products wherever possible.

Migration of the Allansomb family

Early North American records indicate many people bearing the name Allansomb were among those contributors: John Allanson settled in Georgia in 1733.