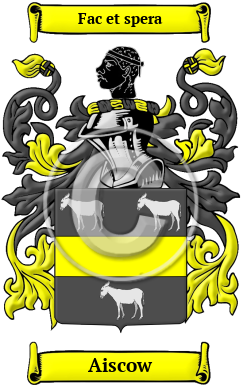 Early Origins of the Aiscow family

The surname Aiscow was first found in the county of Cumberland, however some of the family were found at Aughton in the East Riding of Yorkshire in early times.

"The church [of Aughton], the chancel of which was rebuilt in 1839, has a low embattled tower, built by Christopher, son of the unfortunate Robert Aske who was beheaded at York in the reign of Henry VIII., 1537, as a principal in the insurrection called the "Pilgrimage of Grace," occasioned by the suppression of the monasteries. On the chancel floor is a fine brass slab, on which are graven the effigies of Richard Aske and his lady, who died in the fifteenth century. Near the east bank of the river Derwent the moats and trenches of an ancient castle are still visible; and in the vicinity of the church is a large mound of earth, the site of the castellated mansion of the Aske family." [1]

Eske is a township, in the parish of St. John, Beverley, union of Beverley, N. division of the wapentake of Holderness, in the East Riding of Yorkshire. "This place, in Domesday Book Asche, derives its name from the British word signifying water. It was given at an early period to the collegiate church of St. John." [1]

Early History of the Aiscow family

During the era when a person's name, tribe and posterity was one of his most important possessions, many different spellings were found in the archives examined. Aiscow occurred in many references, and spelling variations of the name found included Askey, Aske, Askew, Aiscough, Ayscoghe, Asker, Ayscough, Aiskey and many more.

Migration of the Aiscow family

Gradually becoming disenchanted with life in Ireland many of these uprooted families sailed aboard the armada of sailing ships known as the "White Sails" which plied the stormy Atlantic. These overcrowded ships often arrived with only 60 to 70% of their original passenger list, many dying of illness and the elements, were buried at sea. In North America, early immigrants bearing the family name Aiscow, or a spelling variation of the surname include: William Askew who settled in Virginia in 1623; Thomas in the same State in 1635; John settled in Cambridge, Massachusetts about the time of the &quot.