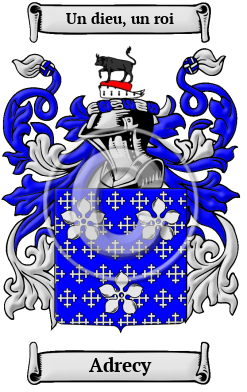 Gaelic is at the heart of all the Irish surnames that can be found throughout the world today. The original Gaelic form of the name Adrecy is "O'Dorchaidhe," from the word "dorcha," which means "dark." Alternatively, some branches of the family may be descended from Norman stock; the name is also derived from "Arcy," the name of a place in La Manche, Normandy. In this case, the surname would refer to "one from Arcy."

Early Origins of the Adrecy family

The surname Adrecy was first found in Galway (Irish: Gaillimh) part of the province of Connacht, located on the west coast of the Island, where they held a family seat from ancient times.

Early History of the Adrecy family

The spelling of names in Ireland during the Middle Ages was rarely consistent. This inconsistency was due to the scribes and church officials' attempts to record orally defined names in writing. The common practice of recording names as they sounded resulted in spelling variations such as Dorcey, Dorcy, Dorsey, Darcey, D'Arcy, O'Dorcey, MacDarcy, Darsy and many more.

Notable amongst the family name at this time was Sir John D'Arcy, chief Governor of Ireland under Kings Edward I, II, III (14th century); Patrick Darcy (1598-1668) a...
Another 27 words (2 lines of text) are included under the topic Early Adrecy Notables in all our PDF Extended History products and printed products wherever possible.

Migration of the Adrecy family

The 19th century saw a great wave of Irish migrating out of their homeland in a great measure due to the oppressive imperial policies of the English government and landowners. Many of these Irish families sailed to North America aboard overcrowded passenger ships. By far, the largest influx of Irish immigrants to North America occurred with Great Potato Famine during the late 1840s. These particular immigrants were instrumental in creation of the United States and Canada as major industrial nations because the many essential elements such as the roadways, canals, bridges, and railways required an enormous quantity of cheap labor, which these poor immigrants provided. Later generations of Irish in these countries also went on to make valuable contributions in such fields as the arts, commerce, politics, and education. Extensive research into immigration and passenger lists has revealed many early immigrants bearing the name Adrecy: Edward Dorsey, who came to Virginia in 1646; Michael Darcy, who settled in Boston, Massachusetts in 1767; George Darcy, who was living in St. John's, Newfoundland in 1774.