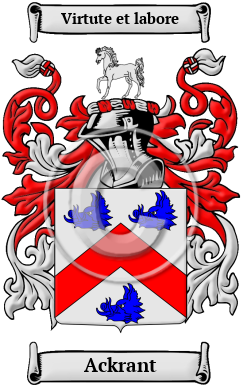 The roots of the name Ackrant are found among the Strathclyde-Briton people of the ancient Scottish/English Borderlands. Ackrant was originally found in Renfrewshire, where they took on the name of the lands of Cochrane in the parish of Paisley, near Glasgow. This place name is of uncertain derivation, perhaps stemming from the Welsh word "coch," meaning "red."

Early Origins of the Ackrant family

The surname Ackrant was first found in Renfrewshire (Gaelic: Siorrachd Rinn Friù), a historic county of Scotland, today encompassing the Council Areas of Renfrew, East Renfrewshire, and Iverclyde, in the Strathclyde region of southwestern Scotland, where the first record of the name was Waldeve de Coueran, who was witness to a charter issued by Dugal, son of Syfyn, to Walter Stewart, fifth Earl of Menteith, regarding several lands in Kintyre. William de Coughran of Lanark swore an oath of allegiance to King Edward I of England during his short conquest of Scotland in 1296. Walter Cochrane was the first record of the more popular spelling used today in 1262. His son William Cochrane, the second chief of the Clan, also rendered homage to King Edward I in 1296.

Early History of the Ackrant family

In the era before dictionaries, there were no rules governing the spelling or translation of names or any other words. Consequently, there are an enormous number of spelling variations in Medieval Scottish names. Ackrant has appeared as Cochrane, Cochran, Cocrane, Cocran, Cochren, Cockram, Cockran, Cockren and many more.

Notable amongst the family at this time was William Cochrane (1605-1685), 1st Earl of Dundonald. Of his children was Sir John Cochrane (d. 1707), who was a Member of Parliament for Ayrshire in 1669; he was suspected of complicity in the Rye House Plot, and fled to Holland in 1683, returned to Scotland...
Another 53 words (4 lines of text) are included under the topic Early Ackrant Notables in all our PDF Extended History products and printed products wherever possible.

Migration of the Ackrant family to Ireland

Some of the Ackrant family moved to Ireland, but this topic is not covered in this excerpt.
Another 31 words (2 lines of text) about their life in Ireland is included in all our PDF Extended History products and printed products wherever possible.

Migration of the Ackrant family

The freedom, opportunity, and land of the North American colonies beckoned. There, Scots found a place where they were generally free from persecution and where they could go on to become important players in the birth of new nations. Some fought in the American War of Independence, while others went north to Canada as United Empire Loyalists. The ancestors of all of these Scottish settlers have been able to recover their lost national heritage in the last century through highland games and Clan societies in North America. Among them: Hugues Cochran, who settled in Quebec in 1685; Richard Cochrane, who came to Antigua in 1709; Agnes Cochran, who settled in Charles Town, SC in 1772; Ann Cochran, a Scotch-Irish settler, who came to New Hampshire in 1722.