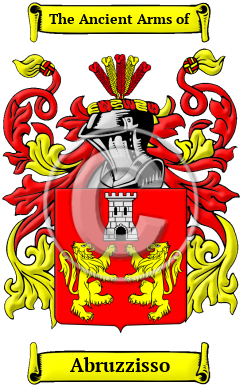 Although this family name surfaced in Padua about the 15th century, the origin of this surname is from the area of Abruzzi, in the Papal States. It is most likely that the family left this area and then took the name Abruzzi, as in "the person from Abruzzi." The name quickly spread through the peninsular part of Italy and it can be found throughout Italy today. The variations of the name which end in "i" tend to be from the north, while those ending in "o" are from the south.

Early Origins of the Abruzzisso family

The surname Abruzzisso was first found in Padua (Italian: Padova, Latin: Patavium, Venetian: Padoa), a city of northern Italian on the River Bacchiglione, anciently known as Patavium, and then Padova. In 1175, the citizens elected the D'Este family as podesta but in 1275 Frederick II took over. The powerful familes of D'Este, Camposampiero and Da Romano were the large influences. The city is rich in art, museums and galleries. Many churches exhibit works of the masters. In those ancient times only persons of rank, the podesta, clergy, city officials, army officers, artists, landowners were entered into the records. To be recorded at this time, at the beginning of recorded history, was of itself a great distinction and indicative of noble ancestry.One branch is claimed to be descended originally from Bruggia of Bruzi in Ferrara. Two members of this branch of the family, Nicolo Bruzi (born 1480) and Benedetto Bruzi (born 1545) became ducal Generals at different times.

Early History of the Abruzzisso family

This web page shows only a small excerpt of our Abruzzisso research. Another 60 words (4 lines of text) are included under the topic Early Abruzzisso History in all our PDF Extended History products and printed products wherever possible.

Italian surnames come in far more variations than the names of most other nationalities. Regional traditions and dialects are a decisive factor in this characteristic. For example, northern names tend to end in "o", while southern in "i". Also important, but not unique to Italy, was the fact that before dictionaries and the printing press most scribes simply spelled words according to their sounds. The predictable result was an enormous number of spelling variations. The recorded spellings of Abruzzisso include Abruzzese, Abruzzesi, Abbruzzese, Abruzzese, Abruzzo, Abruzzi, Abruzzo, Bruzi, Bruzzi, Abbruzzo, Bruzzese, Bruzzesi and many more.

More information is included under the topic Early Abruzzisso Notables in all our PDF Extended History products and printed products wherever possible.

Migration of the Abruzzisso family