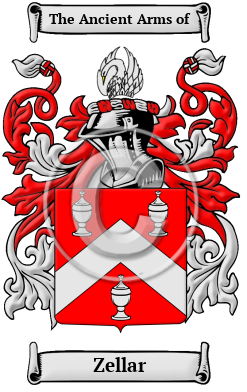 The ancestors of the Zellar surname date back to the Pictish clans of ancient Scotland, Zellar was used as a name for a merchant, someone who worked in cellars, and a saddler. Zellar is an occupational surname, which belongs to the category of hereditary surnames. Occupational surnames were derived from the primary activity of the bearer. In the Middle Ages, people did not generally live off of the fruits of their labor in a particular job. Rather, they performed a specialized task, as well as farming, for subsistence. Other occupational names were derived from an object associated with a particular activity. This type of surname is called a metonymic surname. This surname applies to a variety of occupations. In the case of a merchant, the surname Zellar derives from an ancient derivitave of the Old English word, sell(en), which means, to sell. It also comes from the Old English word, sellan, which means to hand over, or deliver. In the sense of a person who worked in cellars, Zellar is a metonymic occupational name, which comes from the Anglo Norman French word, celler. The cellars referred to in this example, would have been in mansions and other great houses. In the final case, that of a saddler, the surname Zellar comes from the Anglo Norman French word, seller, which is a derivative of the Latin word sellarius, which means seat, or saddle. This ancient occupation was extremely important in the Middle Ages, as horses were the primary mode of transportation.

Early Origins of the Zellar family

The surname Zellar was first found in Aberdeenshire (Gaelic: Siorrachd Obar Dheathain), a historic county, and present day Council Area of Aberdeen, located in the Grampian region of northeastern Scotland, where they held a family seat from early times and their first records appeared on the early census rolls taken by the early Kings of Scotland to determine the rate of taxation of their subjects.

Early History of the Zellar family

In the Middle ages, spelling and translation were not yet regulated by any general rules. spelling variations in names were common even among members of one family unit. Zellar has appeared Sellers, Sellars, Sellors and others.

Notable amongst the Clan at this time was John Seller (ca. 1630-1698), English hydrographer and compass maker who published the first sailing directions for England in 1671, eponym of the Seller Glacier, Antarctica. Abednego Seller (c. 1646-1705), son of Richard Seller of Plymouth, was an English non-juring divine and controversial writer. [1] John Seller ( fl. 1700), was hydrographer to the king, compiler, publisher, and seller of maps, charts, and geographical books, and was...
Another 72 words (5 lines of text) are included under the topic Early Zellar Notables in all our PDF Extended History products and printed products wherever possible.

Migration of the Zellar family

Faced by this persecution and the generally unstable political climate of those days, many Scots chose to leave their homeland for Ireland, Australia, and North America in search of greater opportunity and freedom. The colonies across the Atlantic were the most popular choice, but a passage there was neither cheap nor easily suffered. Passengers arrived sick and poor, but those who made it intact often found land and more tolerant societies in which to live. These brave settlers formed the backbone of the burgeoning nations of Canada and the United States. It is only this century that the ancestors of these families have begun to recover their collective identity through the patriotic highland games and Clan societies that have sprung up throughout North America. Research into early immigration and passenger lists revealed many immigrants bearing the name Zellar: George Sellars settled in Philadelphia in 1854; Thomas Sellars arrived in Philadelphia in 1880; John Sellers arrived in Philadelphia in 1827; Thomas Sellers settled in Philadelphia in 1846.